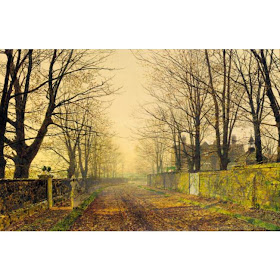 John Atkinson Grimshaw was arguably the most evocative painter of moonlit and evening scenes, who in the 1870s and 1880s, painted a series of pictures of the gloaming seen from the vantage of an elegant suburban road. Often a solitary female figure wanders homeward through the street, freed from the chores of daytime drudgery. Calmness and silence pervades these moody images in which the real subject is not the question of the woman's identity or destination, but the effects of the light upon her surroundings.

Golden Eve dates from the mid 1880s and demonstrates the sophistication of style to which the artist had attained. The notion of conclusion and decay is paramount in this image, the end of the day when the sun sets, the end of the year as the trees are stripped of leaves and the end of the woman's daily routine. However, as with most of Grimshaw's pictures of evening scenes, the mood is not pesimistic or melancholic. By flooding the scene with the diffused golden light, Grimshaw celebrates the beauty of the close of day.
at 1:00 PM