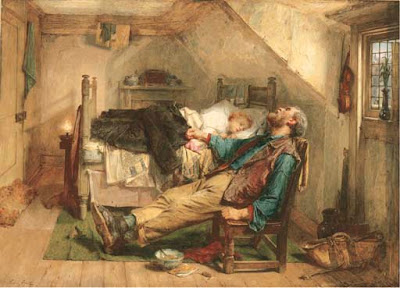 Worn Out unites much of what we value in Victorian Painting. It inspired admiration and wonder upon its 1868 Academy exhibition, and has elicited equally strong responses ever since. The Archbishop of York cited it in his speech at the Royal Academy Banquet, as edifying in its portrayal of 'defeat and distress' for both 'cultivated [and] ...uncultivated' men. Twenty years later, when the picture was again exhibited, a factory girl's comment became art-world legend: 'it's not always the clothes that show the heart, is it?'

Worn Out has also been key to an ongoing critical discussion regarding the validity of sentiment in pictures purporting to be social realist. In her essay on sentiment in the Classic Realism Journal, Penny Saville Fregeau recorded her personal responses to Faed's picture, arguing that it located the ideal in the ordinary. Leslie Williams used different criteria in her essay Scottish Social Values in the Paintings of Thomas Faed, comparing the artist's image to historical truths.

In England, social realism was a product of the Victorian age, in both commercial and altruistic terms. Middle class buyers - northern industrialists who had begun to invest in art - desired pictures that they could understand and even relate to. The milder form of domestic genre perpetrated by Wilkie and Mulready gradually gave way to a harsher aesthetic in the 'hungry forties'. Heralded by a particularly severe winter, this decade saw the effects of the Industrial Revolution take hold, leading to unemployment and unrest in both rural and urban communities. Artists such as G.F.Watts and Richard Redgrave painted pictures which were as dark in mood and colour as the events they portrayed. Usually these reduced a universal problem to individual anecdote, for example in Redgrave's The Sempstress (lot 110). During the Pre-Raphaelite years social realism attained a more poetic bent; pictures such as Henry Wallis' The Stone Breaker (1857-8) reinstated the artisan within a mesmeric landscape that emphasised his place within tradition and natural cycles.

Faed's Scottish heritage meant that he registered these precedents but still harked back in the main to David Wilkie, whose pictures are sweet of temper if humble in outlook. Faed's pictures have been accused of transmuting that sweetness into a more saccharine quality, designed to titillate - but not to upset - the solvent public.

In Worn Out, however, Faed's ingenious ploy of depicting his characters sleeping prevents coyness. The father's body lies slack, his head rolled backwards and legs outstretched. It is interesting that a sketch made prior to the oil, now in the National Gallery of Scotland, shows a rougher father figure - mouth ungainly, legs buckled beneath him. The metamorphosis of concept to reality is one dogged with aesthetic concerns, but these do not necessarily demean a picture's integrity.

Faed was indeed adamant in his defence of the painting's subject, warding off over-melodramatic interpretations (such as the Art Journal's) of a father's vigil over a critically ill child. He wrote to his friend, William Hepworth Dixon:

The picture represents a working man who has been watching his little boy far through a restless night. The child holding his father's shirt sleeve has fallen asleep: daylight finds them both at rest - worn out.

By 1868 Faed had established himself as the leading proponent of Scottish genre in both London and Edinburgh. An early protégé, his talent and enthusiasm had prompted his elder brother John to secure him a place at the Trustees' Academy. He had exhibited over 20 pictures at the Royal Scottish Academy by the age of twenty-three. In 1849 the Art Journal singled out his work, as it was to do on many consecutive occasions, and stated 'Thomas Faed, we prophesy, will achieve great celebrity in his department of art - rustic interiors with figures'. Faed first exhibited at the Royal Academy in 1851, and in 1855 The Mitherless Bairn caused a sensation with both critics and public alike. A venerable Marquis fell prostrate on his knees before it, alarming the authorities as to his relative ability to rise again.

The Mitherless Bairn set the standard for Faed's work in the ensuing decade, though in many ways Worn Out is the more satisfying composition. Both pictures, however, would come under Leslie William's criticism for their depiction of cottage life. The cottages are relatively well ordered, clean if rustic, whilst the dark interiors that large families often occupied were frequently low with unplastered walls.

Faed's interior chronicles many of the qualities which the Victorians deemed moral and elevating. The father's fiddle hangs on the wall. Artistic endeavour was viewed as a way to enlist and evoke cerebral virtues; the greatest exponent of Art's edifying effect on both creator and viewer being John Ruskin. The plant on the window sill alike testifies to care and tenderness within the cottage walls. Although its flowers appear fragile, the stalks stand straight in the morning sunlight.

This theme - fragile things which yet seek to regain their strength - is reitterated many times within the canvas. A candle glows at the foot of the child's bed. Its vibrant flame confirms our hopes for the child's recuperation, (as the dying flame confirms our fears of loss at sea in Frank Bramley's Hopeless Dawn, 1888, Tate Britain, for example). The sunlight itself, which floods in upon the room, suggests not only the possiblity of recovery but of divine acclamation. Light was, and still is, one of the most resonant devices for suggesting divine presence in visual art (Holman Hunt's The Light of the World, 1853, being the most iconic expression of its biblical analogy).

Faed's father is a working man, and presumably a widower. His bag of carpentry tools lies beneath the window. A religious analogy is extended, perhaps, by the man's profession. The symbolic resonance of carpentry is evident in any case: the repairing of the damaged, the creation of structured and worthy pieces that receive daily use. The carpenter's role as both trusty parent, and occasional worker of magic, is implicit.

Faed's picture is also rich in incident. The washing drying on an improvised line, the teapot on the mantelpiece, and most particularly - the tiny mouse which nibbles a piece of remaindered food - all are benign and heartening details which justify even the closest inspection, so finely are they executed. Faed's ability as a technician is often overlooked, as his subject-matter was so fêted. However it is the skills of colourist and draughtsman that often allow an artist to explore such compelling narratives without something superficial jarring the viewer's eye. The way that Faed's canvases lead you straight into the centre of the drama is testament to their technical excellence.

Faed continued to exhibit, with great success, until blindness caused him to cease painting in 1892. His ability to cater to public taste was unrivalled. In 1886 the Encyclopedia Americana spoke for many when it commented:

It has been said that Thomas Faed has done for Scottish art what Robert Burns did for Scottish song. He has made it attract universal interest and command universal respect.
at 6:00 AM

his talent and enthusiasm had prompted his elder brother John to secure him a place at the Trustees' Academy. http://theclassicsempstress.com