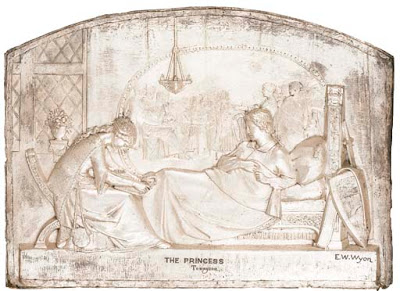 Lord Alfred Tennyson (1809-92) was considered England's greatest poet in the last half of the 19th century. Alfred Tennyson was born in Somersby, Lincolnshire on 6 August 1809, the fourth of 12 children. His grandfather was a member of Parliament and his father, the Reverend George Clayton Tennyson, was the rector of a Somersby parish. At the age of 12 young Tennyson wrote a 6,000 line epic. In 1827 he and his brother Charles published a volume of their early poetic efforts, Poems by Two Brothers. The next year Alfred went to Trinity College at Cambridge. There he became a close friend of Arthur Hallam. In 1829 he was awarded a medal for his poem Timbuctoo. Tennyson's father died in 1831, and he was forced to leave Cambridge. In 1833 he published a volume of poems that included his famous The Lotus-Eaters and The Lady of Shalott. That same year Hallam died and grief-stricken, Tennyson turned to questions of death, religious faith, and immortality in a series of short poems. These were eventually linked together in the great elegy In Memoriam, published in 1850. By 1837 Tennyson's financial affairs were in such poor shape that he had to put aside his plan to marry Emily Sellwood.

The best of his earlier poems and some new ones - Ulysses and Locksley Hall - were published in a two-volume edition in 1842. Despite being regarded as the chief young poet of the day, his income was still too small to permit marriage. The Princess (1847) supported women's rights and was well received by the public and his aforementioned work In Memoriam was an immediate success. When he began to receive Royalties from these he was able to marry Sellwood in 1850. They bought a home and farm on the Isle of Wight and had three children. Tennyson was named Poet Laureate in 1850.
at 6:00 AM