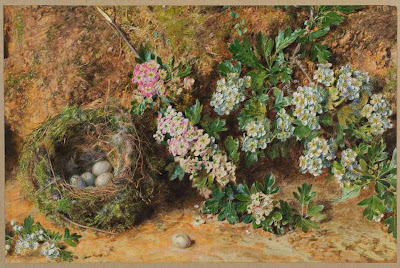 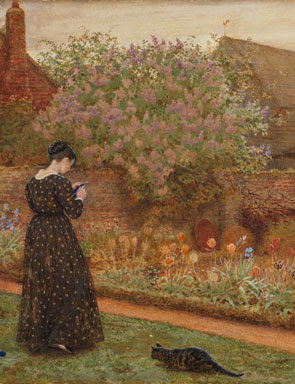 LONDON.- Lost from view for many years and recently presented to The Courtauld Gallery, The Old Farm Garden by Frederick Walker (1840-1875), sets the scene for a wide-ranging exploration of Victorian drawings and watercolours. The exhibition is the first devoted to this area of The Courtauld Gallery’s collection and reflects the growing appreciation for Victorian draughtsmanship. The show, on view from 17 February to 15 May 2011, includes numerous previously unseen works and ranges from informal preparatory drawings for paintings, sculptures and stained glass to highly finished exhibition watercolours. It includes life studies, landscapes, genre scenes and subjects from literature and legend. The exhibition features works by most of the major artists of the age, from the redoubtable Royal Academicians of the early years of Victoria’s reign, such as J.M.W. Turner, William Etty and Edwin Landseer, to Pre-Raphaelites such as Dante Gabriel Rossetti, and works of the 1890s by Whistler and Aubrey Beardsley.

Frederick Walker began his career as an illustrator but his growing success as an ambitious painter in oils and watercolours was cut short by his early death, aged 35. Although he is now little-known outside a small circle of specialists, his work enjoyed a significant posthumous reputation, with artists as diverse as Vincent van Gogh and John Ruskin amongst his fervent admirers. The Old Farm Garden of 1871 shows a woman, modelled by the artist’s sister Mary, knitting out of doors, with a cat about to spring on her ball of wool. Tulips, flowering shrubs and beehives adorn the garden. The influential critic John Ruskin described the flowers in this work as ‘worth all the Dutch flower pieces in the world’. The exhibition also includes an earlier watercolour by Walker depicting boys playing piggyback in a village street, and it offers a rare opportunity to reconsider this outstanding artist.

William Etty’s large watercolour of a female nude contrasted with a cast of the Venus de’ Medici opens the exhibition’s first section on the figure. As well as serving as an artistic exercise, Etty’s image explores the real and the ideal in female beauty. This theme is raised in a different context by Dante Gabriel Rossetti’s imposing Pre-Raphaelite portrait study for his celebrated painting Venus Verticordia. Rossetti is said to have used a cook whom he had encountered on the street as the model for this sensuous idealised image of ‘Venus who turns hearts’. A more intimate aspect of female portraiture is developed in the exhibition by Rossetti’s small pencil sketch of Elizabeth Siddal, his wife and muse, seated at her easel; Whistler’s portrait of the young Elinor Leyland, daughter of one of his major patrons; and George Frederic Watt’s sensitive depiction of Emily Tennyson, wife of the great poet.

The exhibition features a splendid selection of landscapes, produced both abroad and at home. They include John Frederick Lewis’s watercolour of a Cairo silk bazaar, J.M.W. Turner’s late Swiss view of Brunnen on Lake Lucerne (fig. 4) and The Quarries of Syracuse (Sicily) - Edward Lear’s final design for one of the few oil paintings he exhibited at the Royal Academy. Lewis’s portrait of a man in North African dress, possibly the artist himself, underscores Victorian taste for travel and the exotic. Also in this vein is David Wilkie’s Madame Giuseppina, a depiction of a celebrated Greek beauty who was the landlady of an inn in Istanbul where Wilkie stayed in 1840 on his last trip abroad. By contrast, Samuel Palmer’s naturalistic watercolour of the Surrey countryside near Dorking responds to the beauty of the English landscape. Views by Philip Wilson Steer and Whistler show the development of a more informal and Impressionistic approach to landscape painting around 1890.

The exhibition includes a diverse group of drawings of animals and natural history. An outstanding example is William Henry Hunt’s minutely rendered Chaffinch Nest and May Blossom which exemplifies the critic John Ruskin’s ideal of ‘truth to nature’. Despite its air of uncontrived simplicity, this superbly detailed arrangement with branches of flowering hawthorn was the result of painstaking work in the studio. Edwin Landseer’s coloured sketch of a lion’s head has a very different character and was produced in preparation for the monumental sculpted lions at the base of Nelson’s column in Trafalgar Square. This drawing may have originated on one of Landseer’s regular sketching trips to study the lions in London’s Zoological Gardens.

Richard Doyle’s strange Moonlit Landscape with an Apparition typifies the fantasy subjects so enjoyed by the Victorians. The world of medieval legend and literature exerted an even stronger pull on the Victorian imagination. Daniel Maclise’s superb pen and ink drawing depicts a scene from Alfred Tennyson’s Idylls of the King, a cycle of poems set in the time of King Arthur. It depicts Enid kissing her husband Geraint as they prepare to ride away from the scene of the Welsh knight’s victory over a wicked adversary.

Fuelled by the public demand for illustrated books and new popular magazines, many of the major Victorian artists, particularly the Pre-Raphaelite painters, tried their hand at illustration. John Everett Millais’s jewel-like The Parting of Ulysses depicts a scene from Homer’s Odyssey and shows the sorceress Circe waving farewell to the Greek hero Ulysses. This is a copy by Millais of his own wood-engraved illustration from 1862 and appears to have been made in order to meet the art market’s demand for fine small-scale watercolours. Servant Carrying Slippers is one of two small works in the exhibition drawn by the young Aubrey Beardsley in the early 1890s as illustrations for Bons Mots, a series of pocket-size books of the sayings of English wits. Beardsley wrote of these delightful and irreverent inventions: ‘The subjects were quite mad and a little indecent…a new world of my own creation.’ The exhibition concludes with Charles Conder’s Les Incroyables (The Incredibles). Painted on silk, this fine example of the Aesthetic style of the 1890s shows a ballroom with figures dressed in the decadent costume of Paris’s gilded youth in the years after the French Revolution. Conder had been part of the painter Henri de Toulouse-Lautrec’s circle in Paris and this highly accomplished and previously unexhibited work typifies an exhibition which is full of surprises and unexpected pleasures.