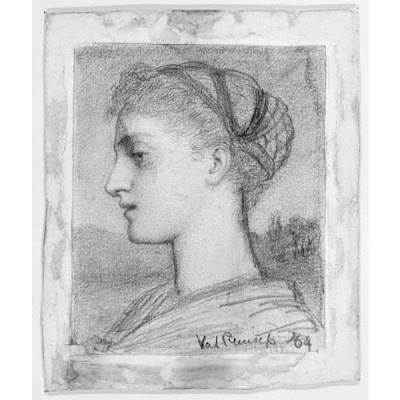 Born in Calcutta, India, his parents were Henry Thoby Prinsep, for sixteen years a member of the Council of India, and Sarah Monckton Pattle, sister of pioneering photographer Julia Margaret Cameron (née Pattle) and Maria Jackson (née Pattle), grandmother of Virginia Woolf and Vanessa Bell. Henry and Sarah had settled at Little Holland House and made it a centre of artistic society.

Prinsep was an intimate friend of G. F. Watts, under whom his son first studied. Val Prinsep also worked in Paris in Marc-Charles-Gabriel Gleyre's atelier: 'Taffy' in his friend George du Maurier's novel Trilby, is said to have been sketched from him. He was an intimate friend of John Everett Millais and of Edward Burne-Jones, with whom he travelled in Italy. He had a share with Rossetti and others in the decoration of the hall of the Oxford Union. With other members of the Pre-Raphaelite Brotherhood, he taught at the Working Men's College during the mid 19c.


"Prinsep feels like a rather unusual name, so I wondered where I had seen it recently. Gavrilo Princip was the marksman who shot and killed Archduke Franz Ferdinand and his wife in 1914, plunging most of the world into war.

No relation, I am assuming. But just as famous."