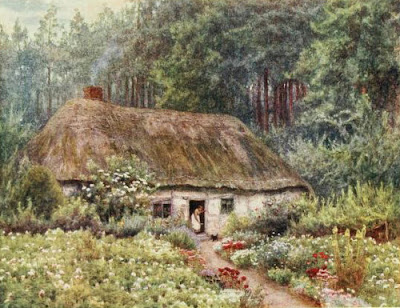 'At the time when this drawing was painted, this cottage, lying snugly in the recesses of 'Wormley Wood, was the last specimen of thatch in the neighbourhood, and only continued so to be due to the intervention of a well-known artist who lived not far off. That artist is dead, and probably in the score of years which have since elapsed the thatch has gone the way of the rest, the harmony of yellowish greys which existed between it and its background have given way to a gaudy contrast of unweathered red tiles or cold unsympathetic blue slates.
The cottage may well date back to Tudor times, and the sweetwilliams, pansies and lavender which border the path to it may be the descendants of far-away progenitors, culled by a long-forgotten labourer in his master’s ‘nose-gay’ garden, which at that time was a luxury for the well-to-do only.’
From ‘Happy England’ as painted by Helen Allingham, R.W.S. With memoir and descriptions, by Marcus B. Huish.
Published 1903.
at 8:08 AM