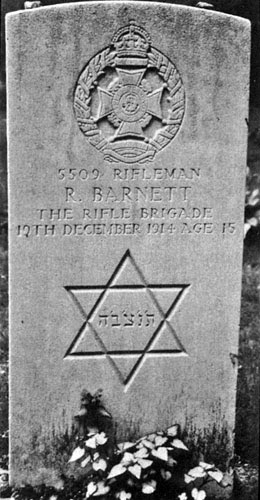 Robert Barnett, born Raphael Glitzenstein, was one of the youngest British soldiers to die during the First World War, aged 15 years and 6 months.
He was the child of Russian parents Barnett, who worked as a tailor, and Esther.
Sadly, he had enlisted after an argument with his parents and was killed on 19 December 1914, in an attack at Ploegsteert Wood.
at 8:04 AM

Thank you for this emotional memorial. He was sooo young :(

A Jewish baby cannot be named after his father or anyone else who is alive. Only in memory of a close relative who had _already_ died. Thus I think dad's name was Phillip.