John Rogers Herbert - Our Saviour subject to his Parents at Nazareth 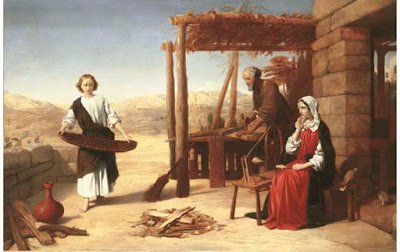 This is one of three large versions of Herbert's most famous composition. The first was exhibited at the Royal Academy in 1847. A second, dated 1856, now hangs in the Guildhall Art Gallery. This, the third, dated 1860, formerly hung in the collection of the Earl of Iveagh at Elveden, the house in Norfolk given in exchange for his territories to Maharajah Duleep Singh, and transformed by him into an Indian palace. Iveagh, a Guinness, bought the house in 1895 and simultaneously built a magnificent collection of Rembrandts, Vermeers, Reynolds and Gainsboroughs which is now left to the nation as the Iveagh Bequest, at Kenwood House.

A keen admirer of Pugin, Herbert converted to Catholicism in 1840, and thereafter painted predominantly religious subjects which show a familiarity with the work of William Dyce and the Nazarenes. The composition was painted at the height of his career: Herbert was elected R.A. in 1846, and the picture is said to have prompted Millais to paint Christ in the House of his Parents exhibited at the R.A. in 1850 (see fig. 1). The composition also pre-empts Holman Hunt's A Converted British Family sheltering a Christian Priest from the Persecution of the Druids of the same year, with its similarly canopied structure, and division of the composition.

When exhibited at the Royal Academy, the catalogue indicated that the landscape was 'painted from a very careful drawing made at Nazareth'. Herbert's desire for topographical and historical accuracy was unusual at this date, and again pre-empts Holman Hunt's travels to the Holy Land of 1854, 1869 and 1873. The subject also was unusual in English Art, but may have been inspired by St. Luke's Gospel: 'the child grew and waxed strong in spirit, filled with wisdom'. Christ's fate is prefigured in the cross of wood in the foreground, in the strips from Joseph's lathe, and in the pensive gaze of the Virgin, which particularly delighted the critic of the Athenaeum who thought the picture 'one of the most poetical and imaginative in this collection'.
at 6:00 AM