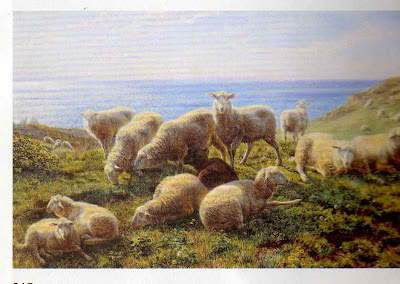 [A Coastal Landscape with Sheep]
oil on board
1833 - 1914.
http://www.tate.org.uk/servlet/ArtistWorks?cgroupid=999999961&artistid=139&page=1
http://www.markmurray.com/browse_by_artist.html?artist=62
http://web.onetel.com/~jongregory/picture6.htm
Born in London, best known for his paintings of animals, though a few sculptures exist. During the 1850's he was influenced by the Pre-Raphaelites and became increasingly detailed. His work was very popular in his life time and he exhibited over 100 works at the Royal Academy as well as other major galleries.
at 7:31 AM