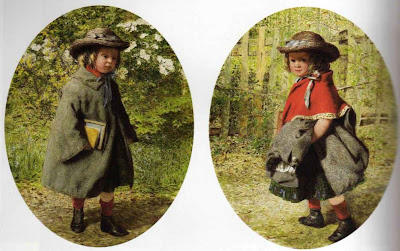 [Going to School]
[Going Home from School]
both 1858, oil on panel, ovals
.
1829 - 1920.
Painter of portraits, figurative subjects and landscapes. Studied with F S Cary and at the RA Schools. Travelled in Italy 1851-3. Exhibited at the RA but mainly at Society of British Artists. Early works were portrais but in 1866 he started painting children and these became very successful, followed by pretty girls. He rented Castle Priory, at Wallingford on the Thames in 1875 and painted many scenes there, including village life. Four of his daughters became artists (Jessica, Edith, Mary and Kate).
at 7:22 AM