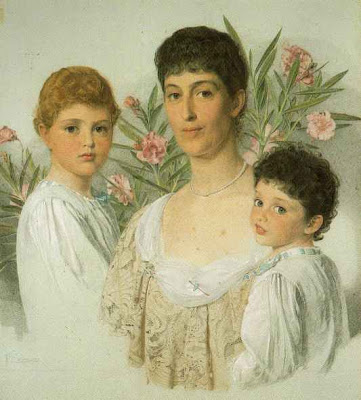 [Portrait of Mrs Christy and her two sons, Stephen and Basil]
signed F Sandys 1900 l.l.
coloured chalks over traces of pencil on a backboard
.
Mrs Christy was the daughter of Admiral Sir G. Phipps Hornby.
She married Henry Edmund Christy (1865 - 1931) of Lordington, Emsworth, near Chichester.
Both these sons died in the Great War (WWI). Apparently the two boys were rather troublesome during the sitting, particularly Stephen who kept turning his head away.
Stephen was born in 1896, Basil the year after.
at 8:02 AM

Nice painting and great to know about the story behind this painting.