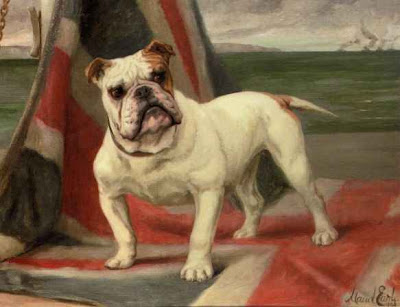 Maud Earl clearly intended her portrait of the Champion Bulldog of 1896 to evoke a patriotic display of Britain's strength; beyond Dimboola and the Union Jack, ships can be seen off the white cliffs of Dover. The print after this work, issued in 1900, was widely disseminated and became a popular image in England during the early twentieth century. As a sign of how compelling the image became, it was used on the front of a promotional pamphlet after World War I that was published in Canada and which listed several English political and military figures of the time.

Perhaps more than any other artist born in the nineteenth century, Maud Earl was the pre-eminent painter of purebred dogs. William Secord considered that, 'when it came to painting the purebred dog, Emms was far surpassed by his contemporary, Maud Earl, and there can be little doubt that she stands out among the many nineteenth century artists who painted dogs.' (A Breed Apart, Woodbridge, 2001). She was born into an artistic family, the only daughter by the artist George Earl's first wife, Alice Beaumont Rawlins. Her uncle, Thomas Earl, was also a talented painter of horses and other animals. Maud was taught by her father and at the Royal Female School of Art, where she quickly developed her natural talent for capturing the true character of her canine subjects. Her half-brother, Percy, was also an artist who completed many commissions of horses and purebred dogs.

She exhibited regularly in England and Europe, and was a prolific and much sought after artist who painted many of the important dogs of the day, including those belonging to the Royal Family and important dog fanciers. She attributed much of her talent to her natural affinity for her subject, 'You can't paint dogs unless you understand them; I don't mean merely from the fancier's point of view. You must know whether they are happy and comfortable, and if not, why not. You must know how to quiet them when they become excited and nervous. You must know all their little likes and dislikes, and this knowledge comes from long experience.' (The Young Woman, November, 1898). Her works were immensely popular with the public for whom images of the dog were an important reflection of their affection for the animal.

Purebred dogs in late nineteenth century England were extraordinarily popular as new breeds were imported and established, and Maud Earl further reinforced their importance by completing their portraits in oils. In 1897 she had an exhibition in which she showed paintings of forty-eight varieties.

By 1916, she had received international recognition with several solo exhibitions, and her work was widely reproduced both in books and print form. Her work may be loosely divided into four styles, the naturalistic, richly painted portraits of dogs from 1880 to 1900; a highly finished but looser, more sketchy style from 1900 to 1915; what she referred to as her oriental style from about 1916 to the 1920s after she emigrated to the United States; and her late rather stylized portraits of dogs during the 1930s in America. It was during her early years in America when she painted her little-known but elegant paintings of birds, which she considered some of her best work.

The Bulldog is rivalled only by the Mastiff as a contender for England's national breed, and is also one of England's oldest and most beloved dogs. By the 1890s when the present picture was painted, the Bulldog had been a longstanding member of the dog show world. What once had been a strong and tenacious fighter had now become, through selective breeding, a show dog and pet but it was still embodied with the ideology of strength and fortitude and hence was an apt symbol at the time for the power of the British Empire.

The present work was clearly intended to be a patriotic display of Britain's strength and naval capacity with the Champion Bulldog of that year, the British flag and the ships in the background seen off the white cliffs of Dover. The print issued in 1900 after this work was widely disseminated and became a popular image in England during the early twentieth century. As a sign of how compelling the image became, it was used on the front of a promotional pamphlet after World War I that was published in Canada and which listed several English political and military figures of the time.

Dimboola Champion, owned and bred by Mr J S Pybus-Sellon, was whelped on 13th April 1893 and was white with lemon markings. His sire was Stockwell and his dam Dextrine.
at 6:00 AM