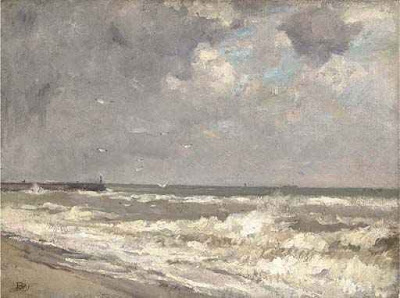 Bertram Priestman has depicted the popular beach resort of Gorleston in Norfolk on a stormy day when the beach is empty. Gorleston pier is visible in the background but it appears engulfed by the powerful waves that break against it.

Priestman, who was born in Bradford in Yorkshire in 1868, studied at the Slade. He was made a Royal Academician in 1923 and in this same year employed the thirteen year old Edward Seago (1910-1974) as an apprentice. The effect of Priestman's tutoring on Seago can be seen clearly in the striking atmospheric landscapes upon which Seago built his career.
at 6:00 AM

I loved this picture as soon as I saw it - and then I read the text! As you know I love Ted Seago paintings and so I was very amused to realise that they were linked. Thank you for publishing this.

You can definately see the influence but Seago went far beyond his teacher.