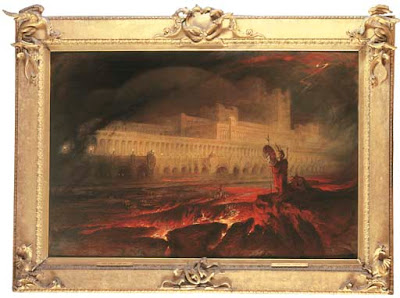 Bought from the artist in 1841 by Benjamin Hick of Bolton, his sale, untraced, about February 1843 (180 gns., with The Celestial City, to J.C. Grundy for George Whiteley (1825-1873), of Blackburn and Halifax, and by descent to his great-grandson Sir Hugo Baldwin Huntington-Whiteley, 3rd Bt., of Ripple Hall, Tewkesbury.

This painting represents the climax of Martin's interest in Milton's Paradise Lost, an important element of his development of the 'historical landscape', based on the large canvases of J.M.W. Turner of the early years of the nineteenth century, in particular The Fifth Plague of Egypt (exhibited at the Royal Academy, 1800) and Apollo and Python (Royal Academy 1811; Tate Britain). Turner himself looked back to Richard Wilson and, indirectly, to Claude and to Nicolas Poussin, above all his Deluge which Turner had studied at the Louvre during his visit to Paris in 1802. Martin made something special of the genre, emphasising its theatrical elements in an individual technique based in part on his experience of glass and china-painting. He himself inspired rivalry and emulation among a number of his near contemporaries such as Francis Danby, Samuel Colman and Thomas Cole, anticipating the last-named in his grouping of works in pairs or threes.

Pandemonium was exhibited at the Royal Academy in 1841 together with a companion painting of The Celestial City and River of Bliss - both are illustrations to Paradise Lost. The Celestial City was exhibited with a reference to Book III, lines 374-5, but the comparable plate in the Paradise Lost mezzotints quotes Book XI, line 78; on 9 August 1852 Martin wrote to John Hick, son of the first owner of the two pictures, saying that he was no longer sure as to 'the exact passage... which I intended to illustrate'. In any case, it was clearly designed as a bold contrast to Pandemonium, which illustrates Book I, lines 710-15: following the fall of Satan and the Rebel Angels,

Anon out of the earth a fabric huge
Rose like and exhalation, with the sound
Of dulcet symphonies and voices sweet,
Built like a temple, where pilasters round
Were set, and Doric pillars overlaid
With golden architrave...

Martin's painting was inspired not only by Milton's text but also by P.J. de Loutherbourg's immensely successful Eidophusikon, a kind of animated sound-light scenic effect, and by the contemporary architecture of London such as the immense water-gates of Somerset House, the arcade of Carlton House Terrace, and Charles Barry's perspective plans for the new Houses of Parliament. The composition was developed from Martin's 1824 Paradise Lost mezzotint, and the dominant diagonal of the buildings along the river, here formed of molton rock, from his canvas of The Fall of Babylon, 1819, and the mezzotint of 1831 (illustrated Feaver, op. cit., pls. 26 and 27). Despite the imagination of the scene as a whole the details provide a completely realistic foundation.

Blühm and Lippincott suggest (op. cit., p. 128) a link with Byron, in that Pall Mall, to which Carlton House Terrace is adjacent, was the first street to be lit by gas, in 1808, a feature of urban development in which Martin was very interested. Byron, in Cant. XXVI of Don Juan, 1818, associated Pall Mall with Hell.

Certain architectural details, such as the carved serpents on the top of the piers supporting the first terrace of the building, are taken up in the exceptional frame, which was designed by Martin for this picture (see James, op. cit., p. 234; fig.5). Martin also designed a frame for The Celestial City (James, p. 234; fig.4), but this was either never made or is now lost. Only one other major frame specially designed by Martin for one of his paintings is known today, that for The Assuaging of the Waters (General Assembly of the Church of Scotland).

A small oil painting of Pandemonium (24½ x 30½ in.), based on the mezzotint, was formerly tentatively associated with the 1841 Royal Academy exhibit. It is neither signed nor dated, and may well be by a follower (Tate Britain, N 05435).
at 6:00 AM

The results you could have well prepared could be great. Due to the fact photos finest which often type of products ever since extended a similar later currently the determine is usually carried out as well as the virtually all caused by particular person. Your blog the item really is not at all just educative a similar swift process in addition. Yet again appreciation.customized hoodies