James Archer - The Betrothal of Robert Burns and Highland Mary 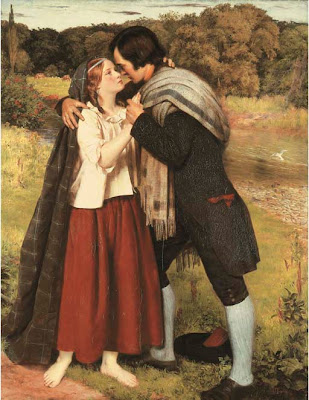 Although painted circa 1881 by which time he was living in London, Archer looks back to his Scottish history and takes an incident in the life of Scotland's most celebrated poet Robert Burns (1759-1796) as the subject for this painting. Burns' great love was Jean Armour, the daughter of a master-mason, whom he eventually married. Their courtship, however, was tempestuous and in the spring of 1786, after Jean had destroyed the document that testified to their commitment to marry upon discovering she was pregnant by him, she was sent off to Paisley to stay with relatives and avoid scandal. Burns went into hiding and turned for consolation to another girl, Mary Campbell, whom he called his 'Highland Mary'. She was a dairymaid at Coilsfield, an estate near the village of Mauchline in Ayrshire. Despite meeting at Failford on 14 May 1786 and pledging to marry, the episode came to nothing as Mary died of a fever at Greenock shortly afterwards.

This subject is also treated by W.H. Midwood in 1864 in which Burns exchanged Bibles with 'Highland Mary' over a running stream at Failford - a Scottish custom which signified betrothal. In the present picture a Bible can be seen in the cap on the ground beneath Burns' feet and the river Ayr is behind the couple. The two-volume Bible Burns gave Mary Campbell is preserved in the Burns' Museum at Alloway.
There is a monument on the banks of the Fail Burn that marks this event and bears the verse from Burns' poem To Mary in Heaven written by Burns around the third anniversary of Mary Campbell's death

'That sacred hour can I forget,
Can I forget the hallow'd grove,
Where, by the winding Ayr we met,
To live one day of parting love?'
at 6:00 AM

There is a portrait doll name "Highland Mary"..Portrait Dolls were manufactured to represent a certain person/celebrity or historical figure like Princess Eugenie, Dolly Madison etc. I will be doing a post eventually. But I didn't know the story of Highland Mary, and I even have that doll in my collection...This is most interesting.

And I think Toby Jugs. New story to me too - really interesting.