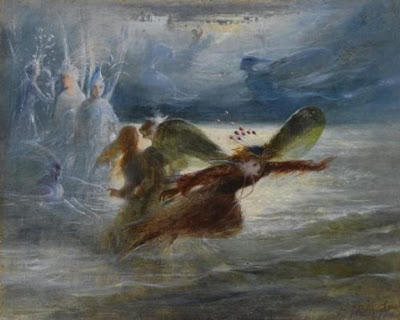 John Anster Fitzgerald was the son of the derided Irish poet William Thomas Fitzgerald. Details of his training as a painter are not known and it is likely that he was self-taught. However, by the 1840s he was exhibiting at the British
Institution, the Royal Academy and the Royal Society of Artists. His oeuvre was not limited to fairy paintings and among the exhibits he showed over his fifty-year career, were landscapes, historical scenes and portraits. However his best-known and most successful paintings are the series of fairy pictures produced during the 1850s and 1860s.

Unlike the other, more conventional subject pictures, his fairy works were highly imaginative, glorious in colour and shimmering with magical poetry. It is these qualities which have made Fitzgerald the most celebrated of all the Victorian fairy painters, more so now than ever before. After his death in 1906, Aaron Wilson of the Savage Club wrote of Fitzgerald, as 'an artist who will probably be more appreciated in time to come than he was in his own lifetime' (Christopher Wood, Fairies in Victorian Art, 2000, p. 98). The work of Fitzgerald epitomises the Victorian fascination with magical subjects of the elfin-folk of literature, folklore and imagination. As Jeremy and Rupert Maas have explained; 'Fitzgerald's creations are pure magic. His fairy paintings, at their best, present us with a world of vivid yet harmonious colours. They are inhabited by beautiful fairies with translucent wings and diaphanous garments, wood sprites with glittering hair, goblins with fantastic
heads, sleeping, walking, dreaming, or tormenting mice or birds. Deep in sunless forest glades or bathed in moonlight, they are framed by honeysuckle, cowslips and Morning Glory, 'nodding violets', 'sweet musk-roses' and 'wild thyme', entwined with writing branches.' (Jeremy and Rupert Maas, introduction to Fairy Painting, exhibition catalogue for a Japanese touring exhibition, 2003- 2004, p. 10)

Many of the subjects of Fitzgerald's pictures were based upon Shakespeare's A Midsummer Nights Dream and The Tempest and it is possible that the present picture, depicting sea-sprites hastening to shore on the surf of the waves, was inspired by the line 'Come unto these yellow sands' from the latter text although it is not a literal depiction. For Fitzgerald Shakespeare's words were suggestive of subjects, but it was within his own imagination that he found his own fairy world.
at 1:00 PM