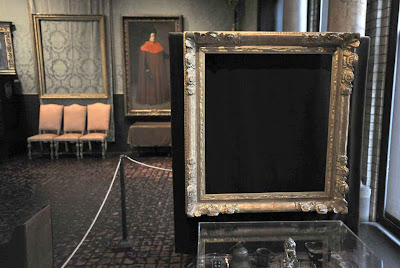 [Empty frames from which thieves took "Storm on the Sea of Galilee," left background, by Rembrandt and "The Concert," right foreground, by Vermeer, remain on display at the Isabella Stewart Gardner Museum in Boston. The paintings were among more than a dozen works stolen from the museum 20 years ago in what is considered the largest art theft in history. AP Photo/Josh Reynolds]

MADRID.- Some of the most important works by recognized geniuses like Picasso, Matisse, Rembrandt, Velazquez, Van Goh, Cézanne and Sorolla were stolen years ago and the Spanish National Police, which tracks them, has released a video with images of the most wanted paintings.
.
These works of art, some stolen more than 20 years ago could reach the black market "at an exorbitant price, " according to specialist officers working in their search and that belong to the Heritage Brigade, of the UDEV the Office of the General Commissioner of the Judicial Police.

Only one of the pieces investigated by agents, according to the National Police, the oil Auvers Sur Oise, Paul Cézanne, is valued at 4.8 million euros. This painting was stolen in January 2000 from the Ashmolean Museum at Oxford (United Kingdom). Le Pigeon aux petits pois by Pablo Picasso, and La Pastorale, by Matisse are some of the most looked for paintings.

Also, more than ten years ago, ten masterpieces valued at 250 million, including Storm on the Sea of Galilee, a painting by Rembrandt made in 1663, were stolen from the Gardner Museum in Boston.

Experts are also trying to trace the whereabouts of two works by Van Gogh: Brooms and Red Poppies, stolen in Giza (Egypt) and View of the Sea at Scheveningen, stolen in December 2002 from the museum named after the artist in Amsterdam.

The officers also seek a painting by Sorolla, El Santero of the Brotherhood, stolen earlier this year from the house museum Benlliure in Valencia and a work by Toulouse Lautrec, Lady with a Hat, stolen in Italy.

But the specialists who have the database of stolen works of art, called Dulcinea, have been looking for some works for over 20 years, some of these were stolen from the Royal Palace in Madrid in August 1989: Unknown Lady Hand and San Carlos Borromeo, in Bayeau both by Velázquez, and Portrait of a Lady by Juan Carreno de Miranda.

More than 8,000 paintings, sculptures, carvings, architectural or archaeological items are recorded in the computer file Dulcinea, a pioneer system in Spain
at 1:00 PM

Ohh, This is sad to see.I am sorry for this lost.Now a days people are getting more eager to steal rather than to work hard, because of poverty. I hope this would be solved quickly and recover the stolen painting.Nice post.

This is really cool! I love when you do links to art stuff.
On an unrelated note- I was wondering if you have been having problems
posting links to blogger on facebook. I have been suddenly having trouble
(and by that I mean it won't do it) and so I looked up some other bloggers
I read on fb to see if they post links.
I noticed you have in the past... have you had problems lately?