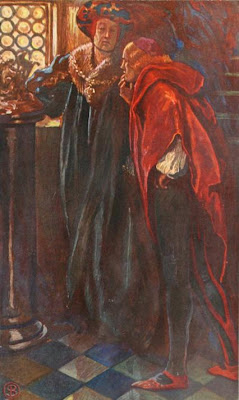 The Studio (1900)
This illustration to Robert Browning's “‘My Last Duchess” has the full title “Notice Neptune, though, / Taming a sea-horse, thought a rarity, / Which Claus of Innsbruck cast in bronze for me.’ Robert Browning. From a Watercolour by Byam Shaw, R.I.”
The artist has depicted the close of Browning's poem, which appropriately closes with the vicious duke's relating how he tamed his “last” wife, who now survives only in a work of art he owns, with the image of a work of art depicting another act of “taming.”