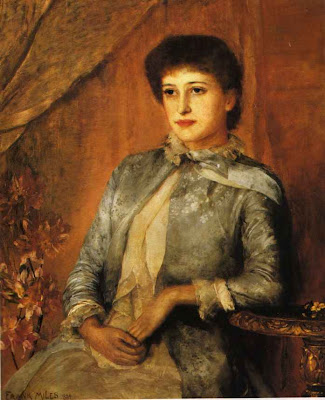 [Lillie Langtry] 1884
oil on canvas
.
1852 - 1891.
Miles is best known for the portraits, drawings, photographs of famous actresses and dancers of the late 1880's. He was the son of rector from Nottinghamshire and showing early promise as an artist went to the RA Schools where he won the Turner prize for 1880. He became artist-in-chief to the magazine Life and started to depict the fashionable ladies of his age. He exhibited occasionally at the RA and Grovesnor Gallery and became friends with Oscar Wilde and in 1879 took a house together in Salisbury Street (just off the Strand) where they gave famous (or infamous!) parties and were much talked about. His father (by now a Canon) strongly disapproved and they disagreed and stopped talking. Whether this was a factor or not, ten years later Miles died, insane.
.
Miles took a series of photographs of the famous Lillie (1853 - 1929) and her beauty became almost a cult. Millais painted her as the 'Jersey Lily' and by Watts as 'the Dean's Daughter'. Poynter painted her and fis portrait of her hung in Miles/Wilde's house.
at 6:00 AM