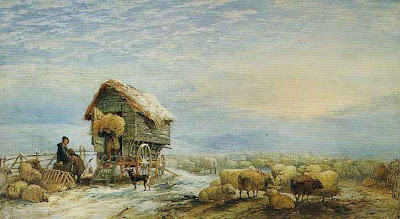 [Sheep Feeding on the Downs] 1850
Watercolour over pencil heightened with white and scrastching out
.
1803 - 1882.
http://www.bridgemanartondemand.com/artist/2966/Edward_Duncan
London marine painter and watercolourist. Began as a copyist and engraver and then set up his own engraving studio but later became a marine painter mostly of coastal and harbour subjects. He also painted landscapes and animals. Exhibited at the RA and elsewhere. Generally considered competent, if rather uninspired.
http://www.artnet.com/artist/628446/edward-duncan.html
at 7:31 AM