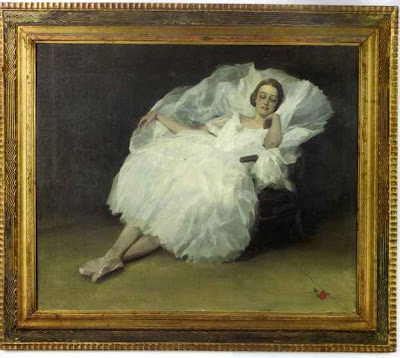 Price Realized £6,250
Vera Clark was an English dancer who joined the Ballets Russes in 1924 under the direction of the inspirational and dynamic leadership of Serge Diaghilev. At the time of joining the company, Vera's name was Russianized to Vera Savina. She married the Principal and choreographer Léonide Massine in April of 1926 and became Principal herself in the season of 1927, the year of this portrait.

The present lot shows Vera dressed as the sylph from one of the oldest surviving romantic ballets La Sylphide, the first version of which premiered in Paris in 1832 with choreography by Filippo Taglioni and music by Jean-Madelaine Schneitzhoeffer. Taglioni's version was revived for the Imperial Ballet in 1892 and interpolated by Anna Pavlova in 1904. The Ballets Russes'version of La Sylphide was created by scenographer and one-time artistic director Alexandre Benois, and became an instant classic.
at 6:00 AM