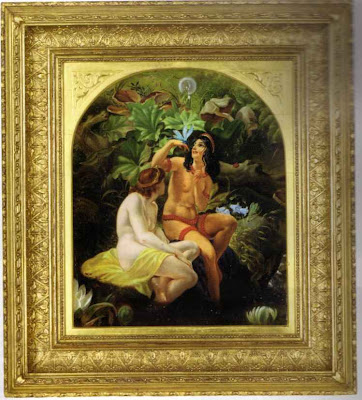 This is an accurate study for two figures at the lower centre of a composition by Paton, illustrating a scene from Shakespeare's A Midsummer Night's Dream. The finished painting represents one of a pair including The Quarrel of Oberon and Titania 1849, also The Reconciliation of Oberon and Titania 1847. The figures in this study are shown in both paintings, currently with the National Gallery of Scotland.

Paton was a highly successful artist who specialised in painting detailed compositions illustrating biblical episodes and imaginative stories based on romantic myths and legends. His interest in achieving convincing naturalistic detail was inspired by his friend John Everett Millais, with whom he studied at the Royal Academy. Paton, born in Dunfermline, returned to Scotland and was appointed 'the Queen's Limner in Scotland' in 1866. His most famous paintings are of fairy subjects which enjoyed great popularity during Victoria's reign.

Paton's painting is an imaginative interpretation of an incident in Shakespeare's play. Oberon and Titania, king and queen of the fairies, quarrel over the possession of a changeling (a human child, carried off to the fairy realm and replaced by a fairy child). The main figures are surrounded by a host of smaller fairy creatures, some grotesque, others beautiful, whose supernatural character excused their sensual appearance and behaviour. The painting was judged to be 'picture of the season' when exhibited in Edinburgh in 1850. Later it captivated Lewis Carroll (the author of Alice in Wonderland) who counted 165 fairies.