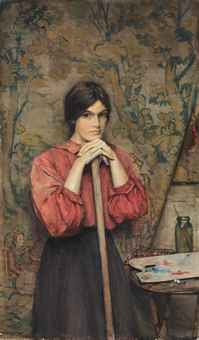 Although Rheam was part of the artistic community based in Newlyn, Cornwall, his subject matter and style frequently strayed dramatically away from the more naturalistic work of his peers. The present watercolour is an example of his work following contemporaries such as Henry Scott Tuke, Laura Knight and Stanhope Forbes who followed a bold, 'square brush' oil technique depicting emotive subjects based on local life in the Cornish fishing community. Many of his works, however, follow the ideas of the Pre-Raphaelites, employing a meticulous use of watercolour illustrating literary and imaginary subjects. Other exponents of fantasy and symbolism, also based in Newlyn, were Thomas Cooper Gotch, who moved to the area in 1887, and the wife of Stanhope Forbes, Elizabeth, who executed a series of Arthurian watercolours for her publication King Arthur's Wood (1904). The model may have been Rheam's wife, Alice Elliot, who appears in many of his works.
http://www.christies.com/lotfinder/henry-meynell-rheam-study-of-a-girl/5396486/lot/lot_details.aspx?pos=9&intObjectID=5396486&sid=&page=10
at 6:00 AM