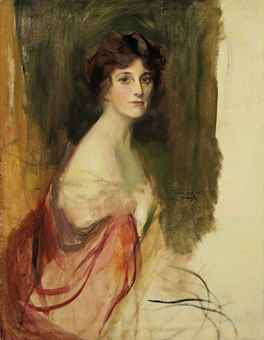 This is de László's first attempt at painting Martha Bacon Whitney, whose finished portrait, completed in February of the same year, remains untraced. The artist was already acquainted with her family, having painted the study-portrait of her father, Colonel Robert Bacon, in 1910, when the latter was serving as the United States Ambassador to France. At that time, Bacon was hoping de László could also paint his daughter, but the artist only had two days to spare in Paris, and aside from painting Bacon's study-portrait, the priority assigned to de László was to produce the likeness of Theodore Roosevelt, who had recently left office, and was staying at the Embassy during his post-term European tour.1 Nevertheless, Bacon was still keen for him to paint Martha. On 19 October 1910, he asked him when the commission would be carried out,2 and again, the following month, he reiterated: 'I hope that some day we shall find time for you to paint my daughter.'3 De László did, but not in Robert Bacon's lifetime.4

It was during his third trip to America that de László painted Martha, by that time married to George Whitney. De László arrived in New York on board the Aquitania on 16 October 1925, and did not leave until April 1926, the demand for his portraiture being so great. He painted Martha Bacon Whitney in February 1926, around the same time as her sister-in-law, the widow of Elliott Cowdin Bacon, née Hope Norman.

In its unfinished state, the present portrait highlights de László's alla prima technique, painting wet-on-wet onto the canvas, and, as he liked to describe it, 'drawing with the brush'. His method conveyed freshness to his style, and relied on an ability to paint at speed. If he was not entirely pleased with a portrait, he did not labour on it, but simply discarded it to start afresh on a new canvas. In this instance however, he signed this first version, which would suggest that he was not necessarily completely dissatisfied, but preferred to explore a different composition. Indeed, in the final version, he portrayed Mrs Whitney on a chair, looking full face to the viewer.

Martha Beatrix Bacon was born in 1890, the only daughter of the four children of Colonel Robert Bacon and Martha Waldron Cowdin. Both her parents had ancestors among early settlers: in Massachusetts on her father's side, whilst her mother had roots in New York. Martha was educated at St. Timothy's School, Stevenson, Maryland. On 10 May 1911, when her father was Ambassador to France (1910-1912), she was presented at Court to King George and Queen Mary at Buckingham Palace. On 2 June 1914, she married George Whitney (1885-1963), son of George and Elizabeth Whitney of Boston, at the Church of the Advent, Westbury, Long Island. The following year George joined the firm of J. P. Morgan & Co., from which he retired as chairman of the board in 1955. Around 1915, the couple built a house, "Home Acres", designed by Delano and Aldrich, on her father's estate, "Old Acres", Westbury, Long Island, New York. They also owned a townhouse in New York: East 74th St South Side. George and Martha Whitney had four children: George Jr. (born c. 1915), Robert (born 1917), Martha Phyllis (born 1918), and Elizabeth (born 1921). Martha Whitney was particularly active in the New York Public Library, the Speedwell Society, the English-Speaking Union, Planned Parenthood, the Woman's National Farm and Garden Association and the Nassau Hospital, Mineola. She died in that hospital on 16 October 1967.

We are grateful to Dr Caroline Corbeau-Parsons and Matt Davies for writing this catalogue entry, which is included in the Philip de László catalogue raisonné online (www.delaszlocatalogueraisonne.com)

The Hon. Mrs de Laszlo and a team of editors are compiling the catalogue raisonn of the artist's work. Caroline Corbeau-Parsons is the British and French Editor, and Matt Davies the American Editor. Please see www.delaszloarchivetrust.com or contact catalogue@delaszlo.com for more information.