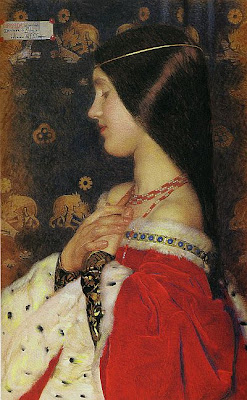 The subject is taken from the tench tale of the tenth day of Boccaccio's Decameron, a story rendered into Latin by Petrarch and adapted by Chaucer for the 'Clerk's Tale' in the Canterbury Tales. The Marquis of Saluzzo is persuaded by his subjects to marry, and chooses as his wife a humble peasant girl, Griselda. He then proceeds to test her loyalty by subjecting her to a senes of cruel trials, all of which she suffers with exemplary fortitude. For the Middle Ages, Griselda was the type or embodiment of Patience.

Exhibited at the RWS in 1916 and reproduced in the Studio the following year, the picture is a charming example of Cowper's early style, characterised by the strong influence of Italian Renaissance painting and an emphasis on the decorative effect of rich fabrics. Other examples include Vanity (1907), his RA diploma work, which echoes Giulio Roman's portrait of Isabella d'Este at Hampton Court; Rapunzel (1908), in the De Morgan Foundation's collection at Old Battersea House; and Lucretia Borgia reigns in the Vatican (Tate Gallery), which was bought for the Chantrey Bequest in 1914 and seems to have been inspired by Pintoricchio's frescoes in the Piccolomini Library at Siena.

This picture, with its left-facing profile pose, was clearly conceived with Renaissance portraits in mind.


The story of Griselda appealed to several Victorian artists, notably C.W. Cope, who illustrated it in a mural in the House of Lords (1849) and a painting exhibited at the Royal Academy in 1852. However. Cowper's painting belongs to a later phase of interest in Italian literary sources. Its closest parallels are the illustrations to the Decameron by his contemporary Byam Shaw (1899); those to a comparable woup of tales, Le piacevole notte by Gianfrancesco Straparola (died c. 1557), by the somewhat older E.R. Hughes (1894): and two late painting, by J.W. Waterhouse. again inspired by Boccaccio (1916-17: both Lady Lever Art Gallery, Port Sunlight).