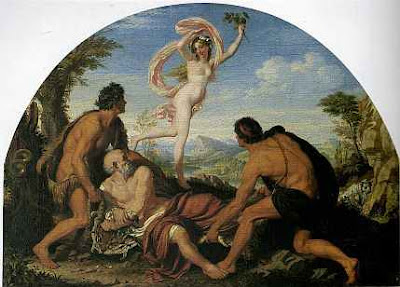 This comparatively early picture was exhibited at the Royal Scottish Academy in 1848, the year that saw the foundation of Pre-Raphaelite Brotherhood, with which Paton had much sympathy. It is also contemporary with his celebrated paintings of the quarrel and reconciliation of Oberon and Titania, now in the National Gallery of Scotland. The Reconciliation had been shown at the RSA in 1847, and the Quarrel was to appear there in 1850, being developed from the artist's RSA diploma work of 1846. The air-borne figure of Aegle might have strayed from one of these paintings, and exemplifies Paton's passion for fairy subjects at this date. Indeed so fond of them was he that in 1850 the photographer David Octavius Hill urged him to send 'historical and sacred subjects' to the RSA in order to confound the critics who accused him of being 'fain mad'. Needless to say, his 'madness' makes him a central figure in the development of the genre of fairy painting which enjoyed such a vogue during the Victonan period.

The subject is taken from the sixth of Virgil's Ecluges, or Bucolics, in which Silenus, the boon companion of Bacchus, noted for his love of wine and skill in music, sings about the origin and nature of the world according to the Epicurean philosophy. At the of the poem he is discovered drunk by two youthful swains, Chromis and Mnasylus. The garlands of flowers which he wore for his recent debauch have fallen off, and they bind him with them, determined that he shall give them the song he has so often promised. Aegle, the fairest of the Naiads, joins in the fun, staining his forehead with the juice of mulberries. Silenus laughs and begs to be released. 'It is enough,' he says, 'that you show that you are able to bind me'; and he launches into song.
at 7:17 AM