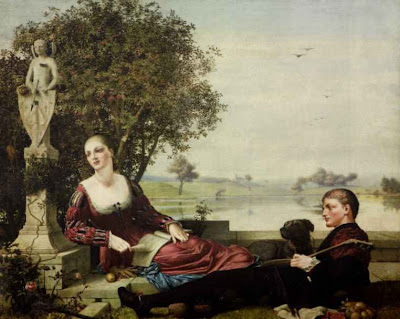 Dated 1879, the picture has traditionally been said to represent Heloise and Abelard, but it cannot be identified with any of Bateman's otherwise recorded works. On the face of it, the subject and its treatment hardly seem to fit. The famous star-crossed lovers, their story vieing in pathos with those of Hero and Leander, Paolo and Francesca or Romeo and Juliet, lived in late eleventh and early twelfth-century France. Bateman's figures seem to belong to sixteenth-century Venice. Their setting recalls some Italian Renaissance painting, if not indeed the work of Capability Brown, while Abelard, if that is who he is, has glamorous, matinée-idol good looks. It is hard to see this curiously modern figure as one of the greatest schoolmen of the Middle Ages.

However, Bateman's work is notoriously eccentric and often refers to the Renaissance masters, whom he had studied on visits to Italy and Spain in the early 1860s. Both tendencies are characteristic of his masterpiece, The Pool of Bethesda of 1876-7 (Yale), while it would be hard to find a quirkier picture than Plucking Mandrakes, a watercolour of 1870 (Wellcome Institute, London). Almost as weird is a watercolour sold at Christie's, London, on 28 November 2000 (lot 43), quaintly entitled Reading of Love, He being by (1873).

Morover the picture is replete with symbols that seem to confirm the traditional identification of the subject. It is true that the significance of the Roman numerals inscribed on the sundial has so far proved elusive, but the presence of the stone figure of Cupid underlines the amorous relationship between the two protagonists, while a host of other symbols point to themes that are central to the tragic story of Heloise and Abelard, notably redemption and the conflict between spiritual and carnal love. They include the Horacian injunction 'carpe diem' (redeem the day) inscribed on the sundial; the wilting sunflower (the vanity of earthly glory?), the dog (faithfulness and self-sacrifice?), the birds and butterfly (the soul and its search for spiritual fulfilment?), the apples (carnal passion and knowledge?), the rose-bush (love, both physical and spiritual?), and the discarded flute (source of heavenly music but also a spent phallus?). Here again, incidentally, Bateman is not afraid of anachronism. The image of Cupid holding a sundial is borrowed from Dante, who was born more than a century after Abelard's death. The Roman de la Rose, in which rose symbolism found such popular medieval expression, also post-dates the lovers' demise, while the ailing sunflower looks even further forward, seeming to anticipate the sick rose of William Blake.

Bateman was one of a group of young artists who came to prominence in the 1860s, devoting themselves to literary subjects and poetic landscapes which represent a significant aspect of the emerging Aesthetic movement. Since he was a man of private means who could afford to work slowly, his oeuvre is small (only thirty-two pictures are recorded and far fewer known to survive) and was for long shrouded in obscurity. As late as 1965 The Pool of Bethesda passed through Christie's with an attribution of Richard Beavis (same initials), while the whereabouts of Heloise and Abelard were unknown to Amanda Kavanagh when she published the picutre in 1989. Only in recent years has Bateman acquired a higher profile, partly as a result of Kavanagh's pioneering article, partly because examples of his work have appeared in two major London exhibitions: The Last Romantics, held at the Barbican Art Gallery in 1989, and The Age of Rossetti, Burne-Jones and Watts: Symbolism in Britain 1860-1910, which followed at the Tate Gallery in 1997.

The third son of James Bateman, a distinguished horticulturist and landscape gardener, Bateman entered the Royal Academy Schools in 1865 and showed six works at the R.A. between 1871 and 1889. But his true spiritual homes were the two galleries that served as showcases for Aesthetic values, the Dudley, which opened in the Egyptian Hall, Piccadilly, in 1865, and the Grosvenor, a much grander and more prestigious affair in Bond Street that held its inaugural exhibition in 1877. It is with the Dudley that Bateman is particularly associated. In his autobiography, An Artist's Reminiscences (1907), Walter Crane described him as 'having the leadership' of a 'clique' of young artists who showed there and were inspired by the works that Edward Burne-Jones was currently exhibiting at the Old Water-Colour Society. Thinking particularly of The Merciful Knight (Birmingham), unveiled in 1864, Crane recalled how these pictures had revealed to him and his friends 'a magic world of romance and pictured poetry, peopled with ghosts of "ladies dead and lovely knights", - a twilight world of dark mysterious woodlands, haunted streams, meadows of deep green starred with burning flowers, veiled in a dim and mystic light'. In addition to Bateman and Crane himself, the group included Henry Ellis Wooldridge, later an eminent musicologist and Slade Professor at Oxford; Edward Clifford, remembered today chiefly for his graceful society portraits and copies after the early works of his hero, Burne-Jones; Theodore Blake Wirgman, who made his name in the 1880s by drawing celebrities for the Graphic; the landscape painter Edward Henry Fahey; and Alfred Sacheverell Coke, who specialised in classical themes and designed tile-work for the grill-room in the St James's Restaurant, built in Piccadilly in 1875 on the site of what is now the Meridien Hotel. The work of these and other Dudley artists was perceived as having a definite ethos, rich in mood and romantic sentiment but far from academically sound. Hence the phrase 'a poetry-without-grammar school' that Emily Pattison coined when discussing the Dudley's 1869 exhibition in the Westminster Review. Crane quoted the phrase in his Reminiscences, and it is still current today.

Bateman was a man of imposing appearance, well over six foot tall, and his wife, born Caroline Octavia Howard, the daughter of a Dean of Lichfield, was equally prepossessing. On their marriage in 1883, they settled at Benthall Hall, a sixteenth-century mansion near Much Wenlock in Shropshire, moving about 1910 to Nunney Delamere, at Frome in Somerset. At both houses Bateman followed the example of his father and created notable gardens. Indeed in later life he became a truly protean figure, extending his interests to sculpture, architecture and scholarship, while 'always experimenting', as Crane puts it, 'in methods and mediums'. He perfected a modelling material which he called 'plasma Bentellesca' (after Benthall Hall) and was a founder member of the Society of Painters in Tempera in 1901. A devoted husband, he died only five days after his wife in August 1922, aged eighty.

Heloise and Abelard belonged to Lincoln Kirstein (1907-1996), a great figure in the cultural life of New York during the postwar period. He is known particularly as a co-founder of the New York City Ballet, and the picture has something of the classical restraint and 'geometry' that is admired and promoted in this art form