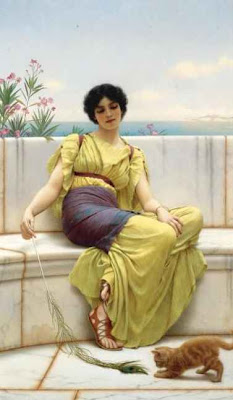 'This is one of the most effective oils by Godward, utilising the elements for which he is most noted. A number of canvases with young girls teasing cats were produced, starting about this time in his career... Dressed in a yellow tunic with purple stola, Godward's usual model from this period sits upon a marble exedra seat with the Mediterranean behind. These simple elements, typical of the artist, combine to form one of the most effective of his oils.' (Vern Swanson, John William Godward, The Eclipse of Classicism, 1997, p. 202)

A beautiful dark-haired and rosy-cheeked maiden listlessly teases a playful ginger tabby with a peacock feather, upon a crescent shaped marble bench beside the sea. Oleander push skyward behind the girl and add to the colour harmony of her yellow and purple robes. Her pose and the setting are reminiscent of Frederic Leighton's famous painting of 1895 Flaming June (Museo de Ponce, Puerto Rico) which also depicts a voluptuous classical maiden in a marble setting. In Leighton's picture the girl is passive and the atmosphere humid, whilst here Godward suggested animation and the heat of midday. The subject of women playing with kittens was one that Godward particularly favoured and as early as 1891 when he painted Playtime he depicted a girl teasing a kitten with a peacock feather. A year after Godward painted Idleness he painted the same model and the same kitten in The Favourite (private collection), a similar composition and almost identical subject. The inclusion of the pet cat, and the tortoise, parrot and bull-finches that appear in other paintings, was intended to serve as a focus for the attention of these bored beautiful idlers as they spend their days in leisurely bliss. The kitten also suggests carefree times when the sun is always shining and the air is full of the heady scent of flowers and sea-salt. The image created is at once suggestive of the ancient past but both the manicured and coiffured maiden and her well-fed pet are also suggestive of modern times. Godward, like Alma-Tadema and Leighton created a pseudo-Grecian world which says more about nineteenth century attitudes towards the past than they do about the past itself. The togas and sandals worn by the young model are the sort of garments sold in the fashionable shops of London and New York to women attending the champagne parties of Kensington in the later nineteenth century. The peacock feathers that appear in proliferation in Godward's art are perhaps a sign of the popularity of the peacock feather motif that became central to fin-de-siècle fashion.

Godward was a quiet and ultimately tragic man (he committed suicide in 1922) but the bleakness of his solitary life is never hinted at in his pictures which depict a perfect world of happiness and sunshine. Consumed by an almost obsessive interest in female beauty, Godward toiled away in his studio upon a series of paintings which explore the varying aesthetics of luscious female sexuality. Glamorous, youthful and sultry, his young Grecian maidens are iconic in the eternal perfection of those lovely soft cheeks and elegant white necks. Diaphanous Greek robes, barbaric jewellery and backgrounds of cool reflective marble compound the exotic sensuality and suggest links to those smouldering courtesans of the ancient world; of Helen of Troy, Phryne and Campaspe. The greatest appeal of Godward's paintings is the sensual rendering of textures and harmonious colouring, from the pale coolness of the marble to the warm blush of the girl's lips.

It is likely that the girl depicted in Idleness was Florence (Florrie) Bird, a professional model who worked at the Royal Academy Life Drawing Schools and posed for several artists, including another painter of classical subject, Herbert Draper. Draper painted her in The Lament for Icarus in 1898 (Tate) and as a monumental nude in his large painting of 1900 The Gates of Dawn (Draper's Hall, London). She certainly posed for Godward in 1896 when he painted Thoughts Far Away which is subtitled Portrait of Miss Bird (location unknown). Godward employed professional models for his paintings, including Ethel Warwick and the famous Pettigrew sisters as he felt that they were better able to hold the strenuous poses he often demanded and that they were not reluctant to pose naked. Florrie is thought to have posed for the large painting Campaspe (sold in these rooms, 14 June 2006, lot 127) in which Godward displayed her in all her naked glory. Comparison of the features of the model in Campaspe and Idleness suggest that they both depict Florrie and she was certainly a model much sought after during this period.

The narrative of the majority of Godward's pictures is minimal and there is rarely an emotional charge to the paintings, as has been remarked by Elizabeth Prettejohn; 'The sense of abstract design predominates; Godward's pictures rarely introduce even a hint of narrative content or psychological interest... The seamless modelling of the flesh and the figure's sultry but unfathomable glance introduce a sensuality that the rational composition keeps under rigorous control. The ancient setting and accessories are an essential component of the picture's mood of distanced sensuality... The tensions between antique remoteness and "life like" rendering of textures, between cold marble and soft flesh, between abstract design and sensual appeal are essential to the picture's impact.' (Imagining Rome, British Artists and Rome in the Nineteenth Century, exhibition catalogue for Bristol City Art Gallery, 1996, p. 168) Godward's paintings depict an uncomplicated world of beauty in an age which is vaguely classical but has never really existed beyond the imagination of the artist and the poet.

Another picture entitled Idleness dated 1907 depicts a similar model dressed in the same costume (sold in these rooms, 12 June 2003, lot 35). As Dr Swanson has pointed out '...in most of Godward's paintings of women, the seldom stand or sit erect, but repose in a lethargic manner.' (ibid Swanson, p. 84) In the present picture and the picture of 1907 the young models poses are demonstrative of this languor and lazy reverie. The idea of this hedonistic pursuit of pleasure is Dolce Far Niente (Collection of Lord Lloyd-Webber) the title of which translates as 'the sweetness of inactivity'. 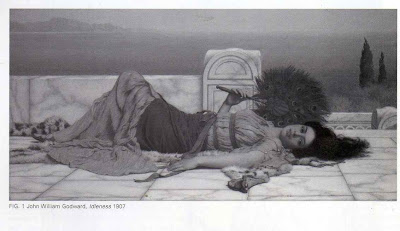 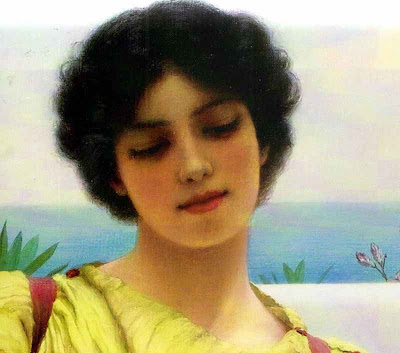