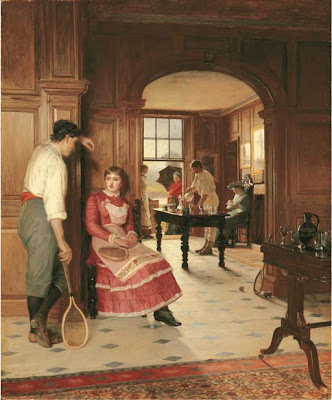 One of my favourite paintings.

'To my mind this is one of the most charming genre scenes of the nineteenth century, a rustic, anglicised version of Tissot. It is wonderfully redolent of an English summer afternoon, with sets of inconsequential tennis, showers, lemonade, and tea doubtless to follow'. So wrote Christopher Wood in an article for the Connoisseur magazine of 1974 (op. cit.), of this, one of the most widely exhibited, widely illustrated and deservedly popular of all the Forbes pictures.

Edith was one of the four artistic daughters of James Hayllar who exhibited alongside their father at the Royal Academy in the late 1880s and throughout the 1890s. It is typical of the spirit in which Kip Forbes has formed the collection that examples by each are included in this sale, by James Hayllar, by Jessica, by Mary, and lot by Kate. Edith was the second daughter, two years the junior of her sister Jessica, and with her the most accomplished of the family. Not only were the sisters close in age, but they enjoyed each other's company. The family recall them setting their easels in the hall of their house, Castle Priory, on the banks of the Thames, near Wallingford, in Berkshire, at either end of the room, each choosing a different subject, but able to converse. The house provided the sisters with their principal inspiration, and perhaps it was sibling rivalry that spurred them to produce such memorable work. Each received a thorough training from their father, James, who from ten till four each day taught them drawing and perspective before allowing them to paint. Evenings were spent modelling in clay, and print-making with either etching or mezzotint. Such tuition stood each of them in good stead, for their pictures show the remarkable degree of skill that was often achieved in the field of Victorian genre painting, even by its more modest practitioners.

Edith liked to depict the aftermath of various sporting activities: lunch after shooting, or tea after boating on the lake. The family enjoyed leisurely exercise - games of croquet were innumerable - and given the changeable nature of the British summer the incident in the present picture was no doubt a not infrequent occurrence. This, and the fact that her brothers and sisters would have been happy to pose for her (the siblings numbered nine in total), accounts for the delightful informality of the composition. The young man to the left may have been a nephew of the artist George Dunlop Leslie who had a neighbouring house called Riverside, and who later married one of the Hayllar family. The mania for tennis had swept the country after its invention in 1874, and was especially popular with the young, for whom it provided better exercise than archery or croquet. The first Wimbledon championships for men were held in 1874 while those for women followed in 1884. The game was subsequently captured by many artists, perhaps most memorably by Lavery, whose pictures, like this, are as much about summer as they are about tennis.

Edith exhibited not only at the Royal Academy from 1881 to 1897 but also at the Royal Society of British Artists, the Institute of Oil Painters, and the Dudley Gallery, then much favoured by women artists. After her marriage in 1900 to Rev. Bruce Mackay she lived in Sutton Courtenay where her husband was vicar. Curiously she appears not to have painted after leaving her family, and indeed her granddaughter was unaware that her grandmother had painted at all, until after her death in 1948. The enchanted life lived at Castle Priory seems to have been so intrinsic to her art, that she lost inspiration after leaving it.

We are grateful to Christopher Wood for his help in preparing this entry.
at 1:00 PM