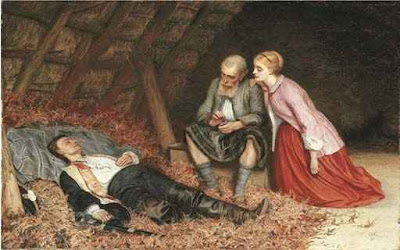 This is a later version of his Royal Academy exhibit of 1869 (no. 701; 29 x 45 in.) entitled In Hiding after Culloden. The Royal Academy picture features solely the worn out soldier and the girl secretly bringing him food. The critic for the Art Journal considered the 1869 version to be 'the artist's best work' (1869; p. 202). This success would have no doubt prompted him to attempt another version the following year. The composition of the later work varies slightly as the girl peers at the sleeping soldier over the shoulder of her father who appears in deep concentration, probably considering the dilemma this deserter or refugee has presented and contemplating the outcome of this infamous battle.

The Battle of Culloden was the final Jacobite uprising and the last major battle fought on mainland Britain. On 16 April, 1746 the army of Prince Charles Edward Stuart was crushed by the Government forces, led by the Duke of Cumberland. The Prince then went into hiding, the Government offering a bounty of £30,000 for his capture. He managed to cross to the west coast and eventually escaped to France, sailing on the French privateer L'Heureux on 20 September 1746.
at 6:00 AM