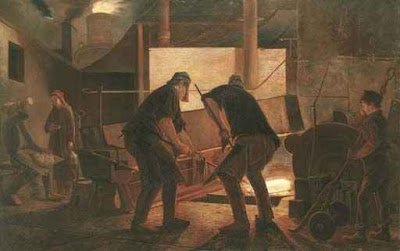 Crowe is an intriguing figure. The son of a journalist, his brother J.A. Crowe was a diplomat and an art historian whose History of Painting in Italy (1903), written with the Italian G.B. Cavalcaselle, was the basis for modern study of Renaissance art. A pupil of Paul Delaroche, with whom he went to Rome in 1843, and a life-long friend of Gérôme, Crowe became secretary to Thackeray, who was his cousin and went with him on a lecture tour to America in 1852. The influence of his master Delaroche is evident in the majority of his paintings which are inspired by historical events, but occasionally he depicted scenes such as the present work which invoke contemporary social comment.

Julian Treuherz described this painting as 'a remarkable scene of workers in an iron foundry, with an eerie lighting effect derived from Joseph Wright of Derby' (Hard Times, 1987, p. 106). He is probably referring to Wright's two versions of A Blacksmith's Shop (1771; Yale & Derby) which are subtly-lit pictures showing three men working at the anvil, the only source of light being from the bar of iron and An Iron Forge (1772; Lord Romsey, Broadlands Collection) which also uses one central source of light. Like Crowe's work they are all imbued with a sense of drama and luminosity.

The classical antecedent for this subject is Vulcan, who in Greek and Roman mythology is the god of fire and the blacksmith who forged the weapons of many gods and heroes. The son of Jupiter and Juno, he was the educator of primitive man and taught him the proper use of fire. He is usually depicted in his forge standing at the anvil, hammer in hand. He was worshipped with Athene (Minerva) at Athens as the protector of craftsmen and in allegories of the four elements, Vulcan personifies Fire.

Crowe's contemporary William Bell Scott (1811-1890) also treated the subject of the foundry in his series of murals commissioned by Sir Walter and Lady Pauline Trevelyan to decorate their home, Wallington House, Northumberland. The series was intended to depict the history of Northumberland and included The Romans Cause a Wall to be Built, A Descent of the Danes, The Death of the Venerable Bede, AD 735 and Grace Darling and her Father Saving the Shipwrecked Crew, 7 September, 1838. But by far the most famous painting in the series was Iron and Coal: The Industry of the Tyne, subtitled In the Nineteenth Century the Northumbrians Show the World What Can be Done with Iron and Coal, 1861 (fig. 1). The scene is set in the factory shed of the railway works of Robert Stephenson and Co., Engineers in which three men or 'strikers' hammer out molten iron.

The subject of hard manual labour was popular amongst Victorian artists. It was famously treated by the Pre-Raphaelite Ford Madox Brown (1821-1893) in his epic painting of 1852 entitled Work (Manchester). This allegory of mental and manual labour depicts a crowded street in which two labourers are repairing the road in the midst of passers by from every social strata.

In the present picture, Crowe does not labour the point of social problems in Victorian industrial England but rather celebrates the working man. He also conveyed this in The Dinner Hour, Wigan (1874; Manchester) where he depicts a group of women, mainly weavers, wearing colourful red, blue and yellow dresses under white overalls, relaxing during their lunch hour. In this he 'created that rarity, a Victorian painting of the working class which is not laboriously making the point about oppression.' (L. Lambourne, Victorian Painting, 1999, p. 384). Treuherz concurs 'in all his social pictures Crowe accepts his subjects as facts rather than as vehicles for pathos or moralising; he was criticised for 'prosaic literalness...He has not attempted to appeal to the imagination or the slightest reference to sentiment'. From a twentieth century standpoint, that is why his work is so intriguing.' (op. cit, p. 106).
at 6:00 AM