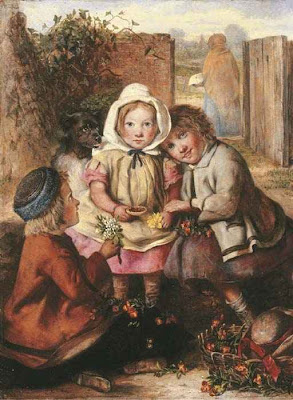 Fitzgerald is best known for his fairy subjects, but in this early work and another entitled Christmas, 1858 he shows himself a thorough follower of the Pre-Raphaelite movement which had been formed in 1848 and gained many adherents. Both pictures show technical similarity to the early works by members of the Brotherhood and also a certain wilful quirkiness. The effect has been likened to the work of the Liverpool Pre-Raphaelite John Lee.

Fitzgerald began to exhibit at the Royal Academy in 1845, and showed fairly regularly until 1881, and then after a long interval in 1902, four years before his death.
at 6:00 AM