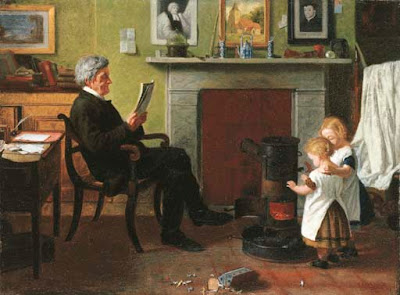 Stacy Marks was a member of the St John's Wood Clique, a group of young artists who derived many of their subjects from history, particularly romantic characters such as the Princes in the Tower, Henry VIII's wives and Lady Jane Grey. It appears from his attire that the gentleman in this picture is in the Church. Above the fireplace a painting of a village church is flanked by two prints, most likely a 16th century portrait of the Protestant reformer Martin Luther to the right, and an eighteenth century pastor to the left. On the floor in the centre a toy set of Noah's ark is spilt over the floorboards.

He later became a member of another north London group called the St John's Wood Art Club founded in 1895 due to the proximity of the artists' studios as opposed to any common artistic style.
at 6:00 AM