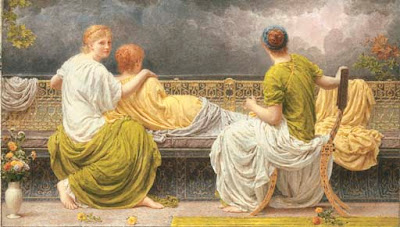 In the last few years of his life, Moore's work took a new direction. No longer content to explore purely formal values, he began to admit an element of symbolism, tentatively at first but soon more explicitly until a climax was reached in his last great painting. The Loves of the Winds and the Seasons (fig. 1), finished only a few days before his death in September 1893.

The change has evoked mixed reaction. A.L. Baldry, Moore's pupil and biographer, regretted it bitterly, seeing it as a negation of everything his work had stood for, a capitulation to 'influences' which in the past he had blithly disregarded. Today, we tend to thinkg of it as an exciting development cruelly cut short by the artist's demise. All, however, seem agreed that Moore's move towards symbolism was connected with the onset of a terminal illness, first diagnosed when he developed a tumour in the thigh in the early months of 1890, and necessitating serious operations the following December and in August 1892. Perhaps there was also another force at work, one less generally recognised. Symbolism, after all, was in the air, succeeding Aestheticism in many different guises. And since Moore's earliest works had been narrative, there may be a sense in which he was returning to his origins, a trend often discernible in the late works of artists. His contemporary Burne-Jones provides an equally dramatic example.

A hint that more was involved than his illness lies in the fact that Moore's interest in extra-formal values is already discernible in A Summer Night (fig. 2), a magnificent picture which he showed at the Royal Academy in 1890, and which had been in progress since the mid-1880s. As Robyn Asleson observes in her recent monograph on Moore, the nude figures here have a new sensuousness and corporeality; they are 'rendered', she writes, 'expressly as objects of desire..in poses resembling successive frames in a mildly erotic peepshow.' Meanwhile the background, normally treated by Moore as little more than a screen for the display of sophisticated decorative patterns, opens up to reveal a stretch of water; and the whole scene is bathed in, of all things, moonlight, the most emotionally charged of all natural lighting, fraught with every kind of romantic association.

Lightning and Light, which appeared at the RA two years later, takes up and develops ideas first explored in A Summer Night. Like Moore's earlier and more Aesthetic works, it is still a tightly constructed formal arrangement. Robyn Asleson aptly describes it as 'scientifically designed...Emphatic, concetric curves generated by the figures' drapery (and echoed in details such as the chair legs) lead the eye across the canvas in a series of wave-like movements'. Nothing shows Moore's formal scrupulosity more vividly than a sketch sold recently at Christie's (fig. 2). It is only for an incidental detail, the scrap of drapery hanging over the ironwork balustrade at the far left, but even here he constructs the forms over what Asleson calls his 'habitual armature of diagonal, horizontal and vertical lines underpinning (the) curvilinear system' of the picture's overall composition.

But we are less aware of these devices than formally, subservient as they are to the picture's narrative dimension. Whereas the figures in A Summer Night had been passive participants in the picture's atmospheric drama, here they are actively involved, showing what for Moore are almost violent reactions to a natural phenomenon which itself represents a powerful escalation in the emotional temperature when compared with the moody but tranquil moonlight of the earlier picture. To quote Robyn Asleson again:

Moving the figures further out of doors, Moore (has) intensified their relationship with the natural world, which is no longer merely an atemospheric backdrop but the absorbing focus of human attention. The dramatic flash of lightning in the cloud-choked sky unifies the figures in a manner that contrast markedly with the abstracted expressions and disconnected actions of A Summer Night. The startled figure at right wheels around to stare at the bolt in the sky...Unperturbed, the woman at far left turns to direct a smile of mild amusement towards the viewer while draping a comforting arm over her recumbent companion.

That left-hand figure, looking out to engage our attention, is itself a dramatic departure from Moore's normal practice of showing his figures almost narcissistically self-absorbed in their role as vehicles of abstract beauty. Her enigmatic expression is almost Leonardoesque, while her action recalls those smiling figures who so often direct us to the narrative content of Dutch old masters. Strange associations, however unconsciously evoked, in a composition which, like so much of Moore's work since the early 1860s, owes its primary debt to the Elgin Marbles.

The picture was started in the studio in Holland Lane, Kensington, which Moore had occupied since 1877, but finished after he moved to 2 Spenser Street, Westminster, in December 1891. His former pupil W. Graham Robertson visited him there the following spring to see the pictures he was about to exhibit, A Reverie (Christie's, London, 8 December 1998, lot 9) at the New Gallery and Lightning and Light at the RA. 'You have seen (them) before', Moore told him in his invitation, 'but I think they are improved now they are finished.'

Critics on the whole liked the picture, though they were nonplussed by the lightning, so out of keeping with what they had come to expect of Moore. The Times praised the 'exquisitely-drawn figures of the three girls (of course in Greek drapery)', and Claude Phillips in the Art Journal was full of admiration for a colour shceme 'of exquisite freshness and beauty'. He urged Moore to 'remove or modify' the 'preposterous simulation of lightning in the troubled sky' in order 'to leave unimpaired the beauty of a rare and curious performance
at 6:00 AM