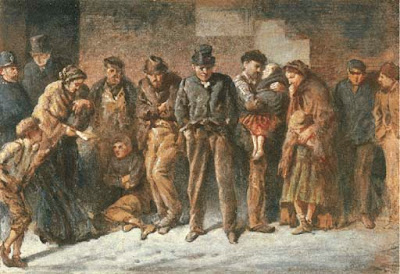 This is a watercolour worked up from the engraving that appeared in the first edition of The Graphic in December 1869 and which set the agenda for the most influential of Victoran weeklies. While planning the first issue of the magazine, William Thomas had asked Fildes to draw something 'more important' than anything he had drawn before. Given a free choice of subject matter, Fildes found his inspiration in a sketch he had made years before, when walking past a police station on a winter night and seeing a crowd of people queuing for admission to the Casual Ward. The scene had made a lasting impression upon him, and the etching that he produced for William Thomas captures the bitter cold and dejection of those desperate for shelter.

Fildes did not rely on memory alone. He returned to the police station, he spoke with those who queued there. He painted, not a generic crowd of street people, but a group portrait, as he commented in the article that accompanied his engraving: 'The figures in the picture before us are... real people who received the necessary order for admission on a recent evening'.

When Charles Dickens saw the engraving, he was convinced that Fildes should provide the illustrations for his latest novel, The Mystery of Edwin Drood, and when Fildes had proved to Dickens that he could draw pretty girls as well as wretches, he did indeed win the commission. The queue for the Casual Ward continued to occupy Fildes mind, however, and he developed the composition for a 1874 oil painting which he exhibited at the Royal Academy. Dickens described the figures as 'sphinxes against that dead wall', a phrase that suggests how very distant and strange could be the productions of realist art.
at 1:00 PM