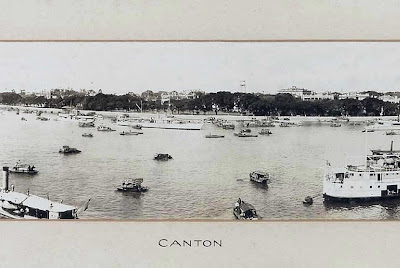 LONDON.- Fascinating and historically important early photographs of the Japanese city of Yokohama in the 1860s by the renowned Italian/British father of photojournalism, Felice Beato, are to be offered at Bonhams India and Beyond sale in London on 5 October.

The Beato images show the rapid development of the old fishing village after a port was opened there in 1859 when Yokohama became the base of foreign trade in the country and effectively Japan’s window on the world.

The prints have pencilled comments by the unknown compiler who seems to have put the album together for an acquaintance of a Mrs Fraser, presumed to be the wife of Jack Fraser of Fraser & Co, a tea exporter. Among the highlights are a three print panorama of Yokohama taken sometime in 1863 or 1864. The scribbled notes identify the British Gun Boat, HMS Conqueror, which was on station at that time and also mention the burning of the British Consul-General’s residence in 1869.

A Beato photograph of a Japanese houseboat and crew is accompanied by the note, “we have one similar to this which we generally use in going to the steamers.” A view of the New Road explains that it is the place to meet “Society”, the road having been built specifically for foreigners to discourage them from using the strategically vital Tokaido road linking Kyoto and Tokyo.

Beato’s importance has long been recognised and he is credited with being the first photographer to use photographs to tell a story. He photographed the Crimean War in 1855 and travelled to India to shoot the aftermath of the Indian Rebellion where he has said to have had bodies disinterred to add realism to his images. Much of his fame rests on his stays in China and Japan, where he was among the first to introduce images of Eastern culture to publics in the West. He photographed the Second Opium War in 1860, ordering the images to show the viewer the sequence of the battle. His work in Japan, where he lived for many years, not only produced historically important images of a society which had been closed for centuries but also created a distinctive Japanese school of photography.