John Ritchie - A Vestry Meeting - Something Wrong with the Accounts 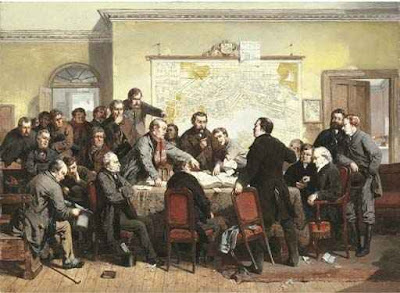 Many Victorian genre paintings dealt with the related concepts of personal nobility, honesty and civic responsibility amongst lower and middle class society. In Ritchie's rather humorous A Vestry Meeting, Something Wrong with the Accounts righteousness will probably prevail. Various council members clearly register alarm about missing parish funds from their budgetary records and ledgers. The humorous mood of this picture is particularly poignant when one considers that immorality and cheating were not amusing concepts for most Victorians who denounced these tendencies as evidence of sinful depravity, exalting instead the benefits of personal accountability and Christian virtue. Amid the disarray of fallen papers and books the room is dominated by a large wall map outlining the plan of the unnamed parish, a discovery has just been made that church funds or property have been misappropriated. Exhibited at the Royal Academy in 1867, this painting was executed at the time of the Commons enquiry into metropolitan local government which recommended the abolition of the vestry and district boards.

Ritchie specialised in panoramic paintings of contemporary Victorian life, his best-known work being A Summer Day in Hyde Park of 1858. A thread of social comment runs through much of his work and he chose to tackle hotly debated political issues such as the present work. Indeed, his last exhibited work at the Royal Academy in 1875 was Right of Way which dealt with a highly topical and controversial subject. In the 1860s and 70s there was a movement against enclosures and the rights to common land which culminated in the battle for public right to Epping Forest. The Commons intervened and there ensued years of debate until it was finally resolved in court in 1874. The verdict was then confirmed by the Royal Commission which had been set up meanwhile by Parliament.

The central composition shows allegiance to Wilkie's Distraining for Rent (1815) with the heated argument conducted over a table, the angry and abused parties to the left leaning forward and pointing at the guilty party who stands defiantly to the right. Like Wilkie's painting the poorer members of society challenge their more wealthy and well-dressed adversaries and is thus a direct critique of the inequities of nineteenth century society.
at 6:00 AM