Richard Dadd - The Haunt of the Fairies 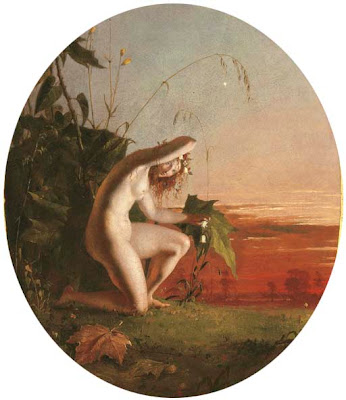 No Victorian exponent of fairy painting was more remarkable than Richard Dadd. He was less prolific than Noel Paton or J.A. Fitzgerald, the other most considerable talents involved, but his mental disturbance took the genre to a level of intensity which they were unable to touch. To compare their work with his is to experience a vivid illustration of Coleridge's famous distinction between Fancy and Imagination.

Dadd's greatest fairy pictures are the two masterpieces he painted in Bethlem Hospital after going mad and murdering his father in 1843: Contradiction: Oberon and Titania (1854-8; private collection) and The Fairy Feller's Master Stroke (1855-64; Tate Gallery). However, in the years immediately preceding his committal, he painted a small group of fairy subjects, of which The Haunt of the Fairies is one. Others are Titania Sleeping (Musée du Louvre, Paris), shown at the Royal Academy in 1841; Puck (private collection), which appeared at the Society of British Artists the same year; and 'Come unto these Yellow Sands' (private collection), exhibited at the RA in 1842. Superficially these paintings appear more conventional than Contradiction or The Fairy Feller, but they too betray a disturbing and slightly sinister quality, eminently suited to their subjects, which seems to anticipate the tragedy of 1842. The menacing canopy of bats' wings which overhangs the action in Titania Sleeping is a good example.

A smaller version of The Haunt of the Fairies, entitled Evening, was included in the Richard Dadd Exhibition mounted at the Tate Gallery, London, in 1974, no. 60 (illus. in cat.).
at 6:00 AM

Beautiful painting, but what a disturbing story. It would be interesting to see the other two paintings after he was comitted.

I think all the links are here:

I'm amazed his life hasn't been made into a film - the crazed genius. Ken Russell would have been perfect. From a very wet uk.