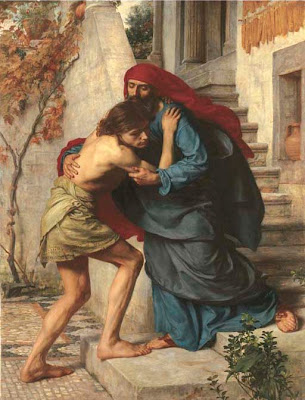 Appropriately in view of the direction his career was to take, Poynter was born in Paris; his father was the architect Ambrose Poynter, his mother the grand-daughter of the sculptor Thomas Banks. He decided to become a painter on meeting Frederic Leighton in Rome in 1854, and Leighton remained his lifetime mentor and hero. Having studied briefly at Leigh's drawing academy and the Royal Academy Schools in London, Poynter went to Paris in 1856 for further study in the atelier of Charles Gleyre, a follower of the great J.A.D. Ingres; and it was here that he absorbed the principles of sound academic draughtsmanship that were to be his forte as an artist. A member of the so-called Paris Gang of expatriate students that was later immortalised by George Du Maurier in Trilby (1894), he was the 'industrious apprentice' and Whistler his 'idle' counterpart.

Poynter began to exhibit at the Royal Academy in 1861, but he did not make much impact until 1865, when he showed Faithful unto Death (Liverpool), an emotive image of a Roman soldier remaining staunchly at his post during the destruction of Pompeii. In 1866 he married Agnes Macdonald, a girl of great beauty and musical talent whose sister Georgiana was married to Burne-Jones. In 1867 he scored another success at the RA with Israel in Egypt (Guildhall Art Gallery, London), an elaborate and ambitious work in which he displayed both his academic understanding of the nude and an Alma-Tadema-like capacity for archaeological precision. During the late 1860s and early 1870s he was also involved in a number of major decorative projects: the tile-work for the Grill Room at the South Kensington (Victoria and Albert) Museum (1868-70), a mosaic in the Houses of Parliament (1869), four large historical paintings for the billiard room at Wortley Hall, near Sheffield (1871-9), and murals in St Stephen's Church, Dulwich (1872-3).

Poynter is remembered today not only as an artist but as an outstanding teacher. His pedagogic career began when he was appointed to run the nearly-founded Slade School of Art at University College, London, in 1871. He immediately introduced the principles of French art education that he had imbibed in the atelier Gleyre, and although he resigned in 1875, his place was taken by a Frenchman, Alphonse Legros, while he himself maintained French teaching methods when he moved on to become principal of the National Art Training School at South Kensington. Although he continued to paint to the end, and even resigned the South Kensington post in 1881 because he felt his creative work was suffering, Poynter remained deeply involved in art administration. In 1894 he accepted the directorship of the National Gallery, which at the time traditionally went to a practising artist. He held the post until 1904, combining it for eight years with that of President of the Royal Academy, in which he succeeded Millais in 1896. He is the only artist ever to have occupied the two positions concurrently, while in remaining PRA until 1918, a year before his death, he enjoyed one of the longest tenures of any incumbent. He was knighted in 1896 and created a baronet in 1902.

The Prodigal's Return was exhibited at the RA in 1869, and is a large oil version of a watercolour produced as an illustration the previous year (see lot 164). Though the illustration was conceived as a symbol of the virtue of mercy, the painting is essentially a straightforward account of the parable of the prodigal son. The subject had inspired innumerable old masters and was handled by several of Poynter's contemporaries. Paul Falconer Poole (see lots 225-7) contributed a version to the same RA exhibition. Millais tackled the theme in his famous Parables of Our Lord (1864). G.F. Watts attempted it in the early 1870s, and there are several etchings by Legros. Poynter himself was not only developing an existing design but had explored biblical subject matter in illustrating Lady Eastlake's History of Our Lord and the Dalziels' never-completed Bible in the 1860s.

Poynter's picture shows him at the height of his powers, and it is no accident that it secured his election as ARA. It dates from the period when he was working on the Grill Room at South Kensington, one of his most accomplished and attractive works, and is only a little earlier than the Dulwich murals, another masterpiece. The intense emotion inherent in the subject, far from finding expression in histrionics, is conveyed, almost paradoxically, through clarity and restraint. Not for nothing was the critic on the Art Journal reminded of William Dyce. But whereas Dyce's was a pictorial language going back to the early Italians via the Nazarenes, Poynter draws on the French academic tradition, relying for his effect on uncluttered, harmonious forms and the most scrupulous draughtsmanship.

Critics on the whole were favourable, if a little daunted by such a parade of skill. The Art Journal found it 'hard to speak too highly of this work'. It admired the 'studious and felicitous' composition, and described the colour as 'solemn'. It noted that the artist had recently been to Italy, and thought it detected the influence of the old masters. F.G. Stephens, writing in the Athenaeum, approved of Poynter's 'fine aims, which seem directed more than of yore to refinement and delicacy of execution...Nowhere is this more evident than in The Prodigal's Return. The most critical notice occurred in the Times. Noting the picture's 'masculine severity' and 'learned and laborious design', the reviewer concluded that if idealising academic painting was ever to find favour with the British public, it would not be through such austere images but the 'sensuous loveliness' of which Leighton was proving himself such a consummate master.

But not everyone saw the picture primarily in aesthetic terms. The Illustrated London News went overboard on Poynter in its 'Special Art Supplement', discussing his election as ARA, publishing his portrait, and devoting a full-page illustration to The Prodigal's Return. Some, its critics wrote, might find the picture 'too academic (in) treatment,' but for him (or her?) there was one feature at least that was 'strikingly pathetic...That feature is the turning aside of the head of the prodigal from the injured father, and the expression in his face. So much shame and contrition, so many recollections of truest affection abused and betrayed, such remorseful gratitude for the unupbraiding, unhesitating welcome which the father has hastened to give are expressed or suggested in that sidelong look that we feel further comment, apology, or illustration from our pen would be an impertinence.' Today, this seems faintly nauseous, especially the rather obsequious ending, but it does at least show that Poynter was capable of touching his audience as well as impressing it.
at 6:00 AM