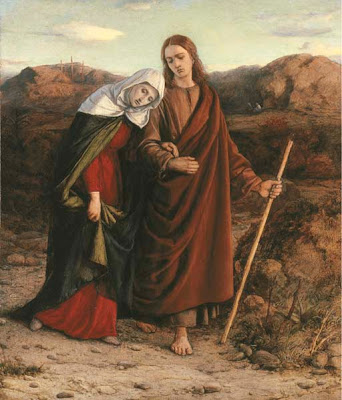 
St John, the disciple 'whom Jesus loved', who wrote the fourth Gospel and witnessed the vision on the island of Patmos which is described in Revelation, was commissioned by Christ on the cross to take care of His mother. In this deeply moving picture, so typical of Dyce in its restrained emotion and its formal clarity, the apostle conducts the Virgin home after the terrible ordeal of watching the crucifixion, he walking slowly and upright, she leaning on his arm, scarcely able to walk for grief.

The picture is a small variant of the better-known work in the Tate Gallery, in which the figures move in the other direction and a landscape-shaped composition allows Christ's tomb to be shown on the right. There is also a conceptual difference; largely because the Virgin is shown more composed but in deepest mourning, the mood is at once more sombre and more restrained.

Authorities disagree over the dating of the two versions. The Tate picture is generally said to have been starteed in 1841/2 and revised in 1851, but Marcia Pointon dates the revision to 1857 and gives 1844-60 as the overall period of gestation. Both she and the cataloguer of the Fine Art Society exhibition (loc. cit.) date the present version to the mid-1840s, but in 1963 Allen Staley wrote that it 'presumably dates from 1851, the year Dyce revised the larger picture' (loc. cit.).

What is not in doubt is that both versions betray Dyce's adherance to the Nazarene tradition and reflect his deep religious faith. A devout Anglo-Catholic, with a keen interest in ecclesiology, church music and ritual, he often chose such sympathetic subjects. Henry VI at Towton (Guildhall Art Gallery) shows the agonised battlefield meditations of a King renowned for his piety and the founder of two great educational establishments, Eton College and King's College, Cambridge. George Herbert at Bemerton (same location) focuses on the early seventeenth-century divine who wrote some of the best-loved devotional poetry in the English language.

Dyce's subject in the present picture finds a certain parallel in Rossetti's watercolour Mary in the House of St John, dating from 1856-8. There are of course connections. Although he was not conventionally religious, Anglo-Catholicism played a crucial part in Rossetti's imaginative development, while Dyce was a great admirer of the Pre-Raphaelites. In fact it was he who brought Ruskin to their defence in 1851, thus causing a sea-change in their critical fortunes.
A small oil sketch, closer to the Tate version than to this, is in the Aberdeen Art Gallery (Pointon, pl. 89).
at 6:00 AM