Frederick Daniel Hardy - After the Party 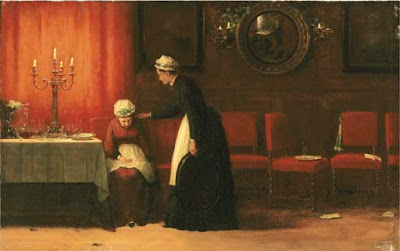 Sympathetic depictions of the plight of servants, exhausted by long hours undertaking hard, physical work, were rare in Victorian art. Cooks were often caricatured as being obese and slovenly, while maids were lampooned for trying to emulate their employers dress and habits. Hardy's empathy is touching, and the picture is a departure from his usual humourous scenes of children engaged in adult activities such as Playing at Doctors (Victoria and Albert Museum). Hardy spent much of his working life in Cranbrook, Kent, and was a member of the artistic colony that included Thomas Webster and George Bernard O'Neill.
at 6:00 AM

This is where human hair extensions have the advantage. Since these wigs are made out of real hair, they feel good on your scalp. Not only do they feel real but look real as well. What makes them more amazing is that full lace wigs uk curling irons and blowers may be used in styling them. What type of hair is used in real hair wigs. It is actually European hair that is used in these lace wigs uk. What is the reason behind this. It is because this type of hair is finer than the others. If you are planning to buy one, it is suggested that you must know what the advantages and disadvantages of these lace wigs uk are. It would also help a lot if you knew what the different styles, costs and textures of these full lace wigs uk are. Furthermore, it is also a good idea to know how to fix a real wig on your head. Here are some effective ways on how to do so.