Erskine Nicol - Thunder and Turf: Where's the t'Other?; and Off to Philadelphia 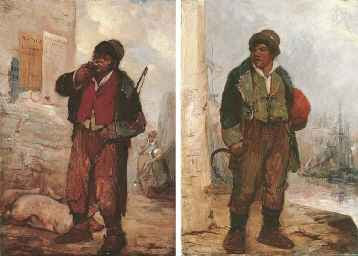 Although a Scottish artist, Nicol is renowned for his humorous paintings of Irish life. The subject of the present pair appears to be two itinerant Irishmen, one with his pigs underneath a notice warning of Foot and Mouth disease looking anxiously down the street in search of his companion, the other with his scythe and bag over his shoulder is at the port ready to depart. The Irish came over to England, normally arriving at Liverpool, to work on the harvest, or as navvies on the railways and other building projects. However, in this pair it is suggested that at least one of them is aiming to start a new life in America, which was the most popular destination for emigrants between 1850 and 1900 when approximately ten million people emigrated from the British Isles.

Nicol painted several emigration pictures, most notably The Emigrants (1864; Tate Gallery) in which an Irish family waits at Ballinasloe station, 'en route' to Galway and the West. In 1871 he exhibited two works depicting emigrant Irishmen at the quayside, Jim Blake in Liverpool (Christie's, London, 20 October 1998, lot 161) and his celebrated An Irish Emigrant arriving in Liverpool (National Gallery, Edinburgh).

Between 1851 and 1893, Nicol exhibited numerous canvases at the Royal Academy and interestingly, a few of his pictures were also displayed or sold in America at the National Academy of Design and the Philadelphia Centennial of 1876. It is possible that the present pair was executed during this period or specifically for an American audience.
at 6:00 AM