James Hayllar - The Only Daughter 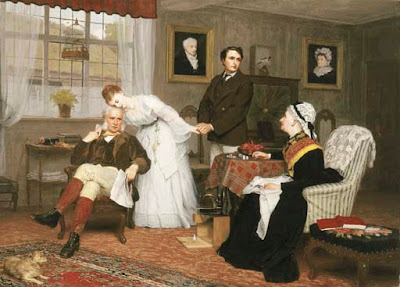 Artistic dynasties were not unusual in Victorian England, but few attained the distinction of the Hayllars, where five members of the family exhibited at the Royal Academy towards the end of the century. In addition to producing a son who was an engraver, James produced four remarkable daughters, each of whom he taught. Examples of their work can be seen in the present sale: that of Edith, Jessica , Mary and Kate.

James Hayllar was born in Chichester in 1829, and after overcoming family opposition enrolled at Cary's Art School in 1842. Francis Cary was a respected historical painter who later took over Sass's Academy in Bloomsbury. He is now principally remembered as tutor to Rossetti and Millais. On completing his studies, Hayllar made a tour of the continent, where he encountered Leighton in Rome in in 1851. His likeness can be seen in Leighton's first great canvas, Cimabue's Madonna carried through the streets of Florence, which was purchased by Queen Victoria, and is now in the Royal Collection, though on loan to the National Gallery. On his return, Hayllar exhibited at the Royal Academy literary and historical genre. However in 1866 he started a series of hugely popular genre studies of children. The first of these was Miss Lily's Carriage stops the Way, in which a child, no more than four years old, has her cloak adjusted before her first party. This was followed by The First Flirtation and The Return from the Ball. After these successes he was proposed as an Associate of the Royal Academy by William Powell Frith and Eyre Crowe, but he missed election by one vote and never tried again. Not being part of the Academy circle he withdrew from London life, and took large houses in the country. In 1865 he submitted pictures to the Academy from Carlton Rookery, near Saxmundham in Suffolk, while a decade later he moved to Castle Priory, on the banks of the Thames, near Wallingford in Berkshire. He was to live there until after the death of his wife, and his move to Bournemouth in 1899.

According to the painted legacy of his daughters, Castle Priory was the setting for an exceptionally happy family life, filled with innumerable children (he had nine himself, but neighbours and cousins frequently visited) where days were filled with games of tennis as well as artistic endeavour. The house was to provide his family with inspiration, and it is interesting to note how few of them painted after their marriages. Hayllar obviously felt their departure from home keenly, for he amplified the theme in the present picture. The only daughter stands counterpoised between her adored father and future husband, whose dynastic duty is made plain by placing his head between the portraits of past generations on the wall behind him. The interior and the occupations of its inhabitants are described in detail: particularly noteworthy is the inclusion of a sewing machine at the centre of the picture.

We are grateful to Christopher Wood for his help in preparing this entry.
at 6:00 AM