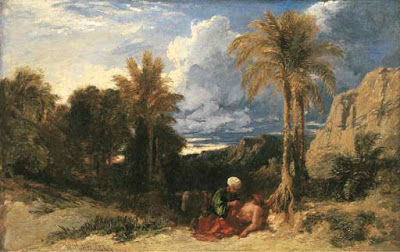 
Müller exhibited an oil sketch for this picture at the British Institution in September 1842 (no. 112). Solly described the sketch as 'a fine example of harmonious colour, and sky and clouds being like a picture of Titian's, grand and powerful ...' and commented that the present picture 'is one of Muller's most powerful works, although it is said to have been completed in one day' (op.cit., pp. 137 and 167). A preparatory pencil and watercolour sketch for the painting, entitled Twighlight Egypt 1838, was exhibited in the Bristol City Museum and Art Gallery, 1991, as no. 102.

Sir William Armstrong (1810-1900), who owned this picture by 1892, was a scientist, inventor, and businessman. He is, however, perhaps most well known as the greatest of Victorian armaments manufacturers. His 'Armstrong' gun, which was breech instead of muzzle loaded, firing a shell rather than a ball was sold all around the world. Cragside, in Northumberland (The National Trust), which he built with Norman Shaw as the architect, is one of the greatest of all late Victorian houses, and still contains a notable group of Victorian pictures. Armstrong also restored Bamburgh Castle.
at 6:00 AM