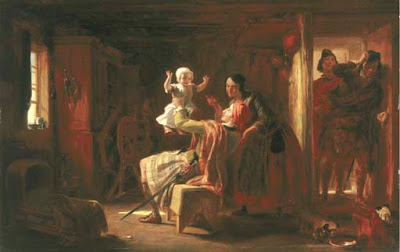 The picture has only acquired this title in recent years, and it may be incorrect. Certainly it is not the work of this title that Allan exhibited at the Royal Scottish Academy in 1842; this is now in the Aberdeen Art Gallery and is a different composition. A picture with the same title that Allan showed at the Royal Academy, London, in 1841 may also be the one at Aberdeen. He exhibited at both venues for many years, and became president at the RSA in 1838.

Allan was a friend of Wilkie from the time when they were fellow students at the Trustees Academy in Edinburgh, and this picture, painted a year before Wilkie's death, is very much in his tradition. Although he sports a kilt, the seated figure's head-dress and profile seem almost Circassian, reminding us that Allan went to Russia in 1805 and spent several years in the Ukraine and Turkey. These travels provided subjects for many of his future pictures.
at 6:00 AM