Henry Le Jeune - 'Thy Will be Done' 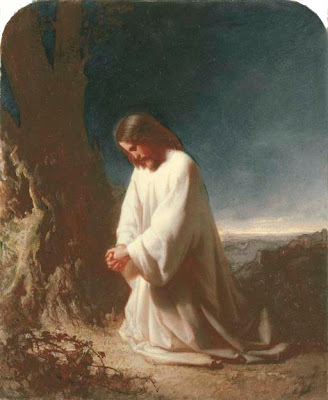 This is a powerful depiction of the Agony in the Garden, on the Mount of Olives, in which, between the Last Supper and his arrest, Christ retired to pray. 'Agony' in this context derives from the Greek meaning a contest, and Le Jeune, through juxtaposing the solitary figure of Christ against the immensity of a luminous and starry heaven brilliantly alludes to the conflict between the two sides of Christ's nature: the human, that feared his imminent suffering, and would have avoided it, and the divine, which gave him strength. The title of the picture derives not only from the Lord's Prayer, but also to the scriptural reference: 'Father, if it be thy will, take this cup away from me. Yet not my will but thine be done'.

The apostles Peter, James and John had accompanied Jesus into the Garden of Gethsemane but then withdrew from him. According to Luke's Gospel there then 'appeared to him an angel from heaven bringing him strength, and in anguish of spirit he prayed the more urgently'. In earlier depictions of the subject artists often gave the angel physical form, perhaps holding the instruments of the Passion, or a chalice and wafer, even though the gospel's reference to a cup was purely metaphorical. Le Jeune's approach is more subtle and only hints at spiritual visitation through the dramatic use of light. However, in the tangle of thorns at Christ's feet, and in the tree behind, naturalistic though they are, reference is obliquely made to Christ's impending fate on the cross.

As the critic of the Art Journal noted, the picture is 'a work that only an artist of elevated mind could have produced'. The picture is one of the finest of a group of religious works produced by Le Jeune in the 1840s and 50s. In 1845 he became drawing master at the RA and in 1848 curator. Later in his career he turned to more profitable genre scenes of the countryside, and children.
at 6:00 AM

Beautiful and stirring the subtle the indications of what's to come. A very moving depiction of the Garden at Gethsemane.
Thank you for sharing

I think he put so much passion and emotion into this picture.