James Sant - Morning. It's the Lark, the herald of the morn. 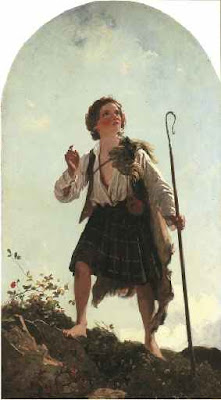 This painting was exhibited at the British Institution in 1847 with a pendant of the same dimensions entitled Evening. Nor is the night unwish'd; while vital heat; Light, life and joy, the dubious day forsake. (no. 170). The lark was frequently used as a literary metaphor for dawn, most memorably in Shakespeare's Romeo and Juliet, Act III, Scene 5:

ROMEO: It was the lark, the herald of the morn,
No nightingale. Look, love, what envious streaks
Do lace the severing clouds in yonder east.
Night's candles are burnt out, and jocund day
Stands tiptoe on the misty mountain tops.
I must be gone and live, or stay and die.

The pendant Evening is accompanied by a quote which is taken from James Thomson's (1700-1748) The Seasons: Winter.

Many of Sant's portraits and figure compositions show children in various stages of youth and innocence, such as Childhood (1842) and The Schoolmaster's Daughter (1874). The present picture seems to combine the qualities of a portrait with a literary and domestic subject. The figure has a tartan jacket, and in other full-size or large portraits Sant often shows the figures in costume or fancy dress and with somewhat soulful expressions. Here the barefooted youth is dressed as a shepherd standing on the top of a hill with a shepherd's crook. Numerous portraits of the period showed children dressed in tartan following the fashion for Scotland and the highlands encouraged by Queen Victoria's own fascination with that country.

The critic for the Art Union considered that the figure was a girl and despite some criticism he felt the artist showed potential,

The subject is followed out by a representation of a youthful figure aquipped a shepherdess, who has ascended to the highest peak of a mountain, and is consequently opposed only to the light sky, as still moving forward she listens to the lark which is seen above her. The expression of the figure is pointed, but the drawing in some parts, as the feet, is open to correction. The slight support of the figure is also objectionable, as it is difficult to tell whence she is come, and whither she is going. With this comparatively slight fault there is much to commend in the work; it is, indeed, a production that exhibits a high and fine mind; and supplies evidence of rightly-directed thought. If the artist be a young man his future is of rich promise.

A student of both Augustus W. Calcott and John Varley, Sant entered the Royal Academy schools in 1840 and almost immediately was able to establish a reputation as a portraitist. He was extremely popular amongst the aristocracy, and among his sitters were the Prince Consort and other members of the Royal family, the Lord Bishop of London, the Duchess of Marlborough and her family, and the children of the Prince of Wales. He undertook twenty-two portraits of the friends and relatives of the Countess of Waldegrave. Known as the Strawberry Hill collection these were shown at the French Gallery in 1861 and secured his admission as an Associate of the Royal Academy and established his reputation. He was appointed Principal Painter in Ordinary to the court of Queen Victoria in 1871 and continued working up until the last year of his very long life. W.W. Fenn's conclusion to his biography of Sant in the Magazine of Art for 1880 identified accurately the secret of Sant's success: 'He has gauged his own powers Most completely, and has not perilled [sic] his reputation by attempts at sensational domestic scenes or grand historical groups. He may fairly rest content with the knowledge that the young generations to come will point with delight and pleasure to the portraits of their mothers and grandmothers which he has limned, and with a little smile of secret self-complacency will hope that they have inherited a share of that beauty and grace so pleasantly handed down to them by the dexterous [sic] and brilliant brush of James Sant, RA' (p. 133).
at 6:00 AM