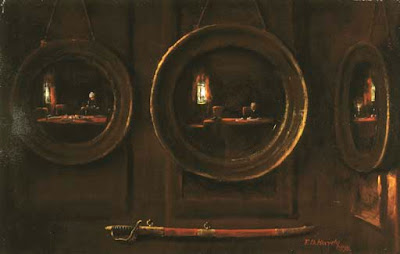 This was the last work exhibited at the Royal Academy by Hardy, who had shown there for almost fifty years. It depicts his studio at Cranbrook, Kent, the town whose activities and interiors had provided him with much of his subject matter throughout his career. The discipline of observing reflection in mirrors has a long provenance in the history of painting. The circular mirrors in this picture recall Jan van Eyck's Arnolfini Marriage, of 1434, in which the protagonists are reflected. Hardy would undoubtedly have seen this in the National Gallery, London.
at 1:00 PM