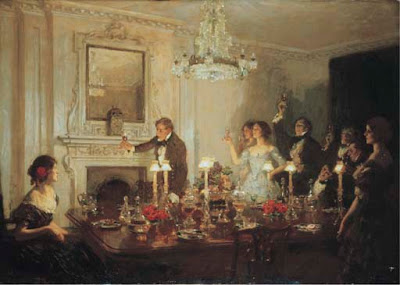 Did he also paint another version entitled 'The Toast'? I have a copy one that was in our house from about 1935, an elderly Edwardian couple at opposite ends of a long diining table, he raising his glass to his wife. It is unsigned, so far as I can see.

Are you sure it is by Jack? I've looked at every collection of his but nothing like that - though artists did produce copies with differences if a painting was popular - but can't find anything I'm afraid.

Hi,
I Have a copy exactly the same as the one detailed on the web.
Any information would help.
Its only from memory about 16"long and about 12" wide, we know it has passed down from around 1940's 1950's

I'm very sorry but I've not been at all well and can't answer any enquiries at the moment.

I just wanted to thank you for this post. Richard Jack is my great-great-grandfather and I've recently become very interested in his life and works. This was lovely to come across!

I am the granddaughter of Richard Jack on my mother's side of the family and can confirm that this painting was indeed painted by him, and I knew that it had come up for sale. During it early career photo copies of the painting were offered in print form, given as a reward for collecting 'cigarette cards' of sections of the painting. Having collected the full picture from the various cards you sent in for free print of the painting which was the 16"x12" print. (There are still prints a few copies that come up in Antique shops.) I believe the painting was originally purchased by the Bristol Art Gallery for many years prior to it came up for sale in latest sale in September 2010. I have at least one of the original copies of the prints together with many photographs of Richard Jack's work, and also a number of original paintings covering his life's work.

We have an early original oil by Richard Jack. If you are interested in seeing this and maybe purchasing it I would be happy to send a copy via e-mail. I am not a dealer but a private collector.

You can contact me on my husband's e-mail address: derek.mills.77@gmail.com

In 1928, a lithograph was published by Frost and Reed, Ltd, Bristol, England, and the lithography was hand-signed by Richard Jack.

I have this lithograph for sale.