William Dyce - The Meeting of Jacob and Rachel 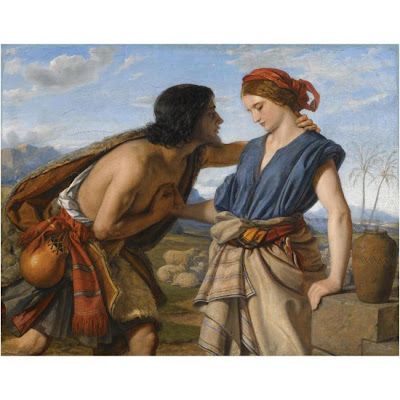 This is the long lost original version of William Dyce's Old Testament subject The Meeting of Jacob and Rachel. The painting was first shown at the Royal Academy in 1850 and was then seen again at the Manchester Art Treasures exhibition in 1857. Possibly identical with a work which appeared at auction in London in 1886 and 1893, from that time on it has been untraced until recently identified in a private collection in Norway. In 1850 it met with unreserved praise from the Art Journal as 'a deduction of sedulous study [which] we cannot too highly praise [as] a most masterly production, in all respects honourable to the British School of Art'. It may be regarded as one of the most important Victorian works of art to re-emerge from obscurity in recent years.

When shown in Manchester in 1857, the Art Journal reiterated its praise of a work of 'fine feeling, and without the least approach to vapid sentimentalism. The draperies are well studied as to truth of costume, and are rich in colour; the work throughout, in treatment and execution, may not inappropriately be termed Titianesque.' On this second occasion of its being exhibited, the same reviewer explained that 'Mr Dyce has, we believe, repeated this subject four times, with minor alterations, and differing in size.' Among the other versions of the subject are two near replicas of the present composition, the first of which was painted some time before 1853 and which is now in the Leicestershire Museum & Art Gallery, while the second was painted in 1857 and was given in 1948 by W.J. Burningham to St Lawrence's, Knodishall, Suffolk, but which was sold from the church in the 1980s (now private collection). The three versions of the subject showing the figures at three-quarters length are superficially similar. However, the first version may be distinguished from the other two (and identified as the basis for an engraved plate of the subject in the 1860 Art Journal) by the inclusion of the vase resting on the parapet upon which Rachel rests her hand as well as by other minor variations. An alternative composition, showing the two figures at full length, originated in an ink drawing (Aberdeen Art Gallery) which was then worked up as an oil shown at the Royal Academy in 1853 (Hamburg Kunsthalle).

Dyce enjoyed a phenomenal success with the subject. The Pre-Raphaelite artist William Holman Hunt was employed by Dyce to make a copy of the present composition while it was still on display at the 1850 Royal Academy, presumably to satisfy a would-be owner of the subject (see Judith Bronkhurst, William Holman Hunt – A Catalogue Raisonné, two volumes, 2006, pp. 138-9, catalogue no. 66). Furthermore, in 1853, William Gladstone, the Prince Consort, and the picture dealers Colnaghi, expressed interest in buying the full-length version of the subject (Dyce wrote to Gladstone proposing an expansion of the subject to include other figures, but this seems not to have been undertaken). The artist's treatment of the subject in its different versions was admired for the way in which the two figures were shown to emphasise their genders. As an educationalist Dyce believed that the reform of English painting depended on a better understanding of anatomy and artists' confidence to treat male and female bodies in their compositions, and had himself attended life classes in the 1840s so as to make the figurative elements in his own compositions accurate and convincing.

The Meeting of Jacob and Rachel illustrates the Biblical text 'Jacob kissed Rachel, and lifted up his voice, and wept' (Genesis 29:11). The moment represented is that when Jacob falls in love with his cousin Rachel whom he had encountered standing at a well with her father's flocks and who was 'beautiful and well-favoured' (Genesis 29:17). The urgency of his emotion, and her demure acceptance of his love, is poignantly conveyed by the way in which he leans forward to look directly into her face, resting his hand on the nape of her neck and pressing hers to his chest, while she stands before him without recoiling or resisting him, only looking downwards in a gesture of modest acceptance of his adoring attention.

Rachel's father, Laban was to trick Jacob into working for him for fourteen years without payment, on the understanding that he would eventually be able to marry Rachel, and then insisted that Jacob should first marry Rachel's elder sister, Leah, before eventually allowing Rachel to be his wife. The subject therefore alludes to the abiding and patient love that Jacob was to show to Rachel (a theme especially meaningful to the artist as he married in January 1850, but after deferral perhaps in consequence of the difference in ages between himself and his bride to be, Jane Brand – he was then forty-six and she was nineteen).

The subject of Jacob and Rachel had been treated by various German artists of the group known as the Nazarenes, who had gathered in Rome and with whom Dyce had made contact in the mid-1820s. Marcia Pointon refers specifically to a drawing by Schnorr von Carolsfeld (Staedel, Frankfurt) and to an engraved representation of the theme by Alexander Strähuber as possible prototypes for Dyce's treatment of the subject. Dyce represents a connection between the Nazarenes and the Pre-Raphaelites, and was in some degree instrumental in transmitting the principles of that earlier attempt to return painting to the spiritual intensity of the pre-Renaissance period to English art of the mid-nineteenth century. To cite one example of his influence upon the Pre-Raphaelites, Holman Hunt's The Hireling Shepherd (Manchester City Galleries) may be recognised as dependent upon The Meeting of Jacob and Rachel in the placing and conjunction of the two figures.
CSN
at 10:08 AM

Beautiful painting. The feelings of the young couple are so vivid. You can sense Jacob's emotions by his posture at confessing his love for Rachel, and at her sweet composure as she listens and accepts his plea of love. If they only knew what was in store for them, they would've eloped, and changed the Old Testament as we know it.

My first love / kiss was with my cousin. I think I was about 9. Lovely work this and I'm not a great lover of religious art. I'm listening to the cricket (acquired taste!).